WHO Warns Against Unnecessary Caesarean Sections

Update Required To play the media you will need to either update your browser to a recent version or update your Flash plugin.
By Lisa Schlein
24 June, 2015

The World Health Organization says the use of surgical childbirth is growing worldwide. Surgical childbirth is when a woman gives birth with the help of a surgical operation, also called a Caesarean section. WHO officials say the operation is becoming especially popular in what they call high- and middle-income countries.

Doctors may advise a Caesarean birth, known as a C-section, when normal childbirth would put the health of the mother or the baby at risk. But the United Nations agency says it is concerned about the possible abuse of this life-saving surgery. 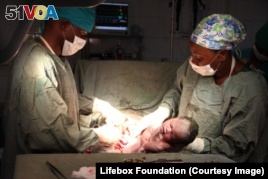 The World Health Organization is a strong supporter of Caesarean sections when they are justified medically. The WHO notes that such operations can save lives. But it says mothers and their babies are put at risk of health problems when a Caesarean section is performed without a medical need.

Since 1985, health experts have set what they call the ideal rate for C-sections at between 10 and 15 percent of all births. New studies show when the rates go below 10 percent, more mothers and babies die because they are unable to get this life-saving treatment. These findings are confirmed by estimates from Africa. They show a link between low C-section numbers and high mortality rates during childbirth.

Yet studies show there is no evidence that death rates improve when the rate rises above 10 percent. In fact, Caesarean sections sometimes can have serious effects on the mother and her child.

Marleen Temmerman is the director of the WHO's Department of Reproductive Health and Research. She told VOA that a C-section is generally a safe operation. But, she adds, health risks do exist.

"The chance of a complication is not that high, but the risk ... the mortality can be very serious. You have like life threatening complications due to bleedings, most of them."

Dr. Temmerman says a C-section is advisable when a traditional vaginal delivery puts the mother or baby in danger.

C-sections are convenient for doctors and hospitals

Dr. Temmerman is concerned about the increase in the number of unnecessary Caesarean sections being performed in both developed and developing countries. She says changing opinions and other lifestyle issues generally are the reason for what she calls an epidemic of C-sections. These operations, she adds, are easier for gynecologists and hospitals.

She says C-sections help doctors to get more control of day-to-day planning. With Caesareans there are no calls in the middle of the night and no emergencies.

"For a gynecologist actually, it is easier to do a Caesarean section sometimes because you can plan your life. You call all your patients in, so to speak, for Caesareans. Every day you do two Caesareans - one at nine, one at 10 in the theater ... no stress, no night duties, no call in emergencies or fetal distress or bleedings or whatever. So, you have a better life."

Dr. Temmerman says C-sections also are better for hospitals because they are able to organize their work force. As for the women, she says many choose a C-section over a vaginal birth because they do not want the pain of childbirth or may be afraid of the physical after-effects.

If you have any comments or questions, please write them in the comments section.

Lisa Schlein wrote this story for VOA News in Geneva. Anna Matteo adapted it for Learning English. George Grow was the editor.

fetal distress – medical : signs in a pregnant woman - before or during childbirth - that suggest the fetus may not be well

convenient – adj. allowing you to do something easily

gynecology – medical : the scientific study of the reproductive system of women and its diseases : a gynecologist is a doctor of gynecology