Who Will Receive the Needed Treatment for Coronavirus?

Update Required To play the media you will need to either update your browser to a recent version or update your Flash plugin.
By Hai Do
30 March 2020


The disease caused by the new coronavirus, known as COVID-19, has now infected nearly 770,000 people. More than 36,000 people have died from the disease.

The United States has more confirmed cases of infection than any other country. Johns Hopkins University's Coronavirus Resource Center's website said Monday that the U.S. has more than 153,000 confirmed infections, followed by Italy with 100,000 and Spain with 85,000. China has about 82,000.

Health officials expect the numbers of confirmed infections to rise, as more people will be tested for the virus. Countries around the world are racing to build new hospitals or adding measures to treat new patients.

A U.S. Navy hospital ship arrived in New York City while the city turned Central Park and other buildings into field hospitals to add spaces. Air Force planes flew patients from France and Italy to Germany and Switzerland to free up intensive care for coronavirus patients on life-support. 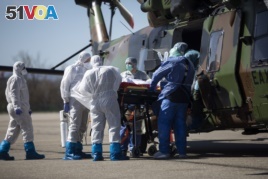 Medical staffs load a patient infected with the Covid-19 virus into a French military helicopter heading to Switzerland to ease the situation in eastern France, Monday, March 30 2020 in Strasbourg, eastern France.

A nursing home official told The Associated Press that sick patients in Spain are dying because they are unable to get into overcrowded hospitals. Healthcare workers expect hospitals will not have enough ventilators -- machines that help patients breathe -- for coronavirus patients needing such treatment.

In the U.S., the non-profit Society for Critical Care Medicine estimated that as many as 900,000 coronavirus patients could need the machines during the outbreak. The United States, however, has only 200,000. Many of those machines are already being used by patients.

In preparation, health officials are examining guidelines from state governments and medical groups on how to use limited resources in emergencies.

For example, New York state's health department guideline excludes some seriously ill people from receiving ventilators in major emergencies. The guideline also says that age may be considered when deciding which patients would be given a ventilator.

This week, however, medical experts in Germany said age alone should not be a deciding factor in treatment for COVID-19 patients.

U.S. hospitals also have to decide how long a patient might need a hospital bed or ventilator and how many more lives the machine could save if it were made available to others. That means doctors could have to make decisions that they have never faced -- whether to take a patient off a ventilator to free it up for others.

"I pray for their good judgment and their capacity as they make very difficult choices," said Erik Curren. His 77-year-old father died earlier this month from breathing problems related to the coronavirus at an assisted living home in Florida.

Nancy Berlinger is with the Hastings Center, a bioethics research institute. She said, "This is a really terrifying decision -- you don't want any doctor or nurse to be alone with this decision."

Dr. Deborah Birx is leading the U.S. effort in the fight against COVID-19. She noted that there is no evidence yet that a hospital bed or ventilator will not be available for Americans when they need it. Even in New York, she said, beds are still available in intensive care units and a large number of ventilators are not being used.

But what is happening in many countries has worried American healthcare workers.

In France and Spain, hospital and nursing home officials say nursing home residents with signs of COVID-19 are not necessarily admitted to intensive care.

Marc Bourquin of the French Hospital Federation said in hard-hit areas, "they are hospitalized only when there is a chance to save them."

"One heart and 10 people who are waiting for a heart transplant. Who gets the heart? The one who has the greatest chance of living better and longer with that heart," he said.

Hai Do adapted this story for Learning English based on Associated Press news reports. Ashley Thompson was the editor.

guidelines - n. rules or instructions that tell how something should be done

exclude - n. to leave out something

capacity - n. the ability to do something

bioethics - n. the ethics of medical and biological research

transplant - n. a medical operation in which an organ is put in the body of a person