Why Are Americans So Divided?

Update Required To play the media you will need to either update your browser to a recent version or update your Flash plugin.
By VOA
19 June, 2016


Mike from Florida got right to the point.

Calling into C-SPAN TV Thursday, Mike said he did not like the gun control bill supported by that morning's special guest, Rhode Island Congressman David Cicilline.

"Where to start? First of all, it is not your job to keep Americans safe," Mike said. "It is your duty to uphold the Constitution and the Bill of Rights...You are playing on people's emotions. We know what your intentions are."

Cicilline said that isn't the case. 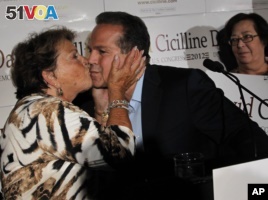 "My most important responsibility is to keep people safe and honor the Constitution," he said. "I think you can do both things."

Doug McAdam is a Stanford University sociology professor who co-wrote a book on divided America.

"People are so convinced that their opinions are righteous and that others aren't just wrong, but morally suspect," he said.

McAdam's opinion is that most Americans are not so divided. He said most people share moderate views on the top issues facing the nation.

But increasingly, he said, the people calling C-SPAN and writing strong opinions on Facebook and Twitter are very conservative or very liberal.

Response to 2001 Attacks and Orlando Shootings

After the September 11, 2001 terrorist attacks on New York, Pennsylvania and Washington D.C., Democrats and Republicans in Congress gathered for a moment of silence and to sing "God Bless America."

But the response was not quite as unified after the attack on a gay nightclub in Orlando, Florida, on June 12. The gunman claimed his allegiance to the Islamic State as he killed 49 people and wounded another 53.

Some Democrats walked out as a moment of silence began Monday in the U.S. Capitol for victims of the worst mass shooting in modern American history.

Cicilline was one of the Democrats who walked out. He said he was angry that such events are not followed by action to make future killings less likely.

Back in Revolutionary Times

Divisions in America are nothing new.

In the 1770s, there were divisions in America between "loyalists'' to Britain and those who wanted to end English rule. From 1861-1865, the Southern and Northern U.S. states fought a deadly civil war.

During the 1960s and 1970s, there were bitter fights over civil rights for African-Americans and the U.S. war with Vietnam.

But there are differences in modern-day America.

Paul Stekler is a professor at the University of Texas who is working on a nine-part film series about divisions in America.

He said Americans watch cable TV news and read stories that support their own political views. They often live in communities where most people belong to the same political party.

He said it used to be angry Americans had fewer ways to express their anger. You could write a letter to your local newspaper, but if it got a few responses that would be unusual.

"Now, we all get to show how angry we are," Thompson said. "We can go on the Internet and proclaim our anger to the entire world."

President Barack Obama, in his final State of the Union address in January, said one of his few regrets as he began his final year as president is continued divisions in America.

"Democracy grinds to a halt without a willingness to compromise, or when even basic facts are contested, or when we listen only to those who agree with us," Obama said.

The presidential campaign has only added to the divisions. Republican Donald Trump refers to Hillary Clinton, his Democratic opponent, as "crooked Hillary." Clinton said Trump is "temperamentally unfit and totally unqualified" to be president.

Calls to Unify After Orlando

Both candidates, however, expressed their strong support for the gay community after the Orlando attack. And most Americans have also come together to support those affected by the worst mass shooting in modern U.S. history.

Spencer Cox is a Republican Lieutenant Governor in the western state of Utah. He spoke at a ceremony to honor victims of the Orlando attacks. He apologized for not being kind to people he went to school with who were "different," and whom he later learned were gay.

Cox told the crowd "my heart has changed," largely because he got to know gay people.

"May we try to listen more and talk less? May we forgive someone that has wronged us? And perhaps, most importantly, try to love someone that is different than us. For my straight friends, might I suggest starting with someone who is gay."

On a JetBlue flight, passengers and crew tried to comfort a woman traveling to the funeral of her grandson killed at Orlando's Pulse Nightclub.

As they left the plane, passengers and crew stopped to offer her sympathy.

"Every single person stopped to speak to her, and not a single person was impatient at the slower deplaning process," wrote flight attendant Kelly Davis Karas on her Facebook Page.

There was also news coverage of people waiting in long lines in Orlando to donate blood for those injured in the shooting.

But there was one very hateful response.

Roger Jimenez is a pastor of the Verity Baptist Church in northern California. He praised the mass shooting, saying the Bible warns about homosexuality.

"Orlando is a little safer tonight," Jimenez said. "The tragedy is more of them didn't die."

The Sacramento City Pastors Fellowship, representing 700 ministers, responded. They said the message from Jimenez goes against the Bible's teachings and that their "hearts are broken" at the "cowardly act" by the shooter.

We want to hear from you. Write to us in the Comments Section and share your views on 51VOA.COM

intention -- n. the thing that you plan to do or achieve

moment of silence – n. a short remembrance for people who lost their lives

convince – v. to cause someone to believe that something is true

response – n. something that is said or written as a reply to something

proclaim – v. to say or state something in public

comfort – v. to cause someone to feel less worried, upset

deplane – v. to leave an airplane

cowardly – adj. describing someone afraid to do what is right or expected