Why Are Migrants Crossing the US-Mexico Border in Record Numbers?

Update Required To play the media you will need to either update your browser to a recent version or update your Flash plugin.
By Bryan Lynn
13 January 2023


United States border agents made a record number of arrests in the South the past fiscal year, which ended in September.

In an effort to deal with the situation, U.S. President Joe Biden announced new steps last week. He said border patrol agents would immediately start turning away Cubans, Haitians and Nicaraguans who illegally cross the border from Mexico.

The new rules expand on an existing effort to stop Venezuelans attempting to enter the U.S. That effort began in October and led to a sharp drop in Venezuelans coming to the southern border. 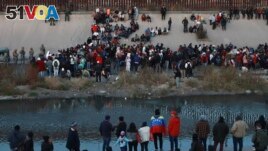 "Do not, do not just show up at the border," Biden said last week in his first major speech on border security. At the same time, he said the U.S. would permit up to 30,000 people from Cuba, Nicaragua, Haiti and Venezuela to enter the country by air each month.

Who is trying to enter the U.S. at the border?

During the past fiscal year, agents arrested more than 2.2 million people at the U.S.-Mexico border.

But many of those individuals had tried to cross more than once after being caught. The migrants were quickly expelled to Mexico under a COVID-established order known as Title 42.

Before last year, Mexico had generally only been accepting the return of its own citizens along with migrants from Guatemala, Honduras and El Salvador. The number of Venezuelans crossing the border fell sharply after Mexico agreed to accept expulsions of Venezuelan migrants last October.

Why are people crossing?

Before Title 42, migrants had been permitted to arrive at a U.S. port of entry and tell border officials they feared returning to their home country. That action would start an asylum process.

Migrants seeking protection must prove they have been persecuted, or fear they will be, on the basis of race, religion, nationality, political opinion or membership in a social group. The migrant is required to make an official asylum request to a U.S. asylum officer or in U.S. immigration court.

Other migrants who arrive on U.S. soil are permitted to ask for asylum, even if they cross the border illegally and turn themselves into border agents. But winning a case that way is a long and complex process and can take years to complete.

What happens to people after they cross?

Migrants who cannot be expelled under Title 42 are processed under an immigration law known as Title 8. Those individuals can be detained or released in the U.S. during consideration of their cases.

Asylum seekers can seek work permits as long as they attend court hearings and other immigration requirements.

Last year, the Republican governors of Texas and Arizona bused thousands of migrants from the border to northern cities like New York and Washington, D.C. The governors said the action eased pressure in border communities and expressed their opposition to the policies of President Biden and Democratic lawmakers.

What paths to legal immigration are available?

There are a number of ways to enter the U.S. legally as an immigrant. These include being sponsored by a U.S. citizen or company, to perform a particular job or to study. But getting a visa approved can take a long time and the process is not always available to under-represented communities.

The Biden administration set a goal in 2022 to resettle 125,000 refugees who registered from abroad after former President Donald Trump sharply reduced admissions during his term. But the COVID-pandemic added to existing delays and prevented the U.S. from reaching that goal.

When Biden took office in 2021, he urged Congress to pass wide-reaching immigration reform. Efforts to fix what many believe is a broken immigration system have been a long-standing goal of past administrations. But lawmakers have repeatedly failed in recent years to reach an agreement to pass major new policies.

sponsor – v. to take responsibility and give financial support to another person