Why Do We Use 'Rx' for Medicine?

Update Required To play the media you will need to either update your browser to a recent version or update your Flash plugin.
By Frank Beardsley and Anna Matteo
20 October, 2018


And now, the VOA Learning English program Words and Their Stories.

Each week, we tell about terms and expressions we use in American English. Sometimes we give you the origin, or starting point. But oftentimes language experts do not know exactly how a word or expression came to be. So, there can be many "origin" stories.

Today we run into just that problem. But it is not about a word or expression, but rather a symbol – Rx.

A symbol is a sign that represents one or more words. The "Rx" sign is formed by placing a line across the right foot of the letter "R." It represents the word "prescription" and has come to mean "take this medicine."

In the States, we often see this sign on drug stores and doctor's offices. It also appears on bottles of pills and other medicines.

But how did Rx come to mean prescription medicine?

One common explanation is that "Rx" has Latin roots. Some word historians suggest that "Rx" gets its meaning from the Latin word "recipere," meaning "to take."

They add that by the late 1500s, the spelling of the word and its meaning had changed. It became "recipe," meaning a "medical prescription." This meaning remained in use until the middle of the 1700s. At that time, people also began to use the word "recipe" in food preparation, as we do today.

Yet, the symbol "Rx" and the meaning "take this medicine" stayed unchanged.

Okay, so that origin story is not so interesting. Instead, let's hear another story that also claims to explain the history of Rx.

Some experts say the sign began 5,000 years ago in Egypt. At that time, people prayed to Horus, the god of the Sun. Legend says that when Horus was a child, Seth, the demon of evil, attacked him.

When Seth put out the eye of the young Horus, the mother of Horus called for help. Thoth, the god of learning and magic, answered her cries. With his wisdom and special powers, Thoth healed the eye of Horus and the child was able to see again.

The ancient Egyptians used a picture of the eye of Horus as a magic sign to protect themselves from disease, suffering and evil.

Long after the collapse of ancient Egypt, doctors and scientists in Europe continued to use the sign. But over the years, it changed from the eye of Horus to the sign for Jupiter, the chief god of the Romans. Jupiter's sign looked much like the printed number "four." 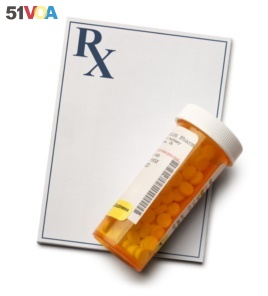 Over time, that sign also changed. It became the easily-recognized letter "R" with a line across its foot. The sign no longer means help for the sick from an ancient god, but rather "medicine to take."

So, that is what the symbol means even though we cannot guarantee how it came to be. To make it up to you, we give you a useful, medicine-related expression.

Now, when a doctor prescribes a patient medicine, it is only for that patient, no one else. Giving someone a taste of their own medicine sounds like the right thing to do. A person is supposed to take the medicine as doctor has prescribed for them.

But that is not what this expression means.

When you give someone a taste of their own medicine, you treat them as they have treated you. And we almost always use this expression when talking about bad treatment.

Let's hear how it can be used.

B: Thanks! Hey, can you keep an eye on things here? I need to go and get Natalie.

A: I thought Michael was giving her a ride.

B: That's what he said. But he hasn't shown up. She's been waiting at her place for an hour.

A: Michael has been doing that a lot lately. He promises to do something and then doesn't follow up. Last week, we were supposed to go to the movies, but he stood me up. And he didn't even call to let me know he couldn't make it.

B: He was a no-show for me just last week too.

A: You know, one day, we should give him a taste of his own medicine. We should agree to do something -- something really important to him -- and then never show up.

B: Having a taste of his medicine might help. But you know we'll never do that.

A: I know. Look, you stay here and take care of the party. I'll go and get Natalie.

A: That would be a big help. Thanks! Be careful on the road.

And that's Words and Their Stories from VOA Learning English. I'm Anna Matteo.

Do you use medicine in a similar expression in your language? Let us know in the Comments Section. Or simply tell us about a time when you had to give someone a taste of their own medicine.

I got a bad case of lovin' you

No pill's gonna cure my ill

Frank Beardsley and Anna Matteo wrote this story for VOA Learning English. George Grow was the editor. At the end, Robert Palmer sings "Bad Case of Loving You."

guess – n. an attempt to give an opinion or answer about something when you do not know much about it or are not sure about it

symbol – n. a letter, group of letters, character, or picture that is used instead of a word or group of words

prescription – n. a written message from a doctor that officially tells someone to use a medicine, therapy, etc.

legend – n. a story coming down from the past

make it up to (someone) – phrase : to do something helpful or good for (someone one has hurt or treated wrongly)

stand (someone) up – phrase : fail to meet someone for a date, meeting, or appointment, especially without telling them