Why Is Life Expectancy Falling in US?

Update Required To play the media you will need to either update your browser to a recent version or update your Flash plugin.
By Hai Do
25 December, 2018


Suicides and drug overdoses are two reasons for a continuing decrease in how long Americans are expected to live.

The Centers for Disease Control and Prevention reported recently that there were more than 2.8 million deaths in the United States in 2017. Of those, 47,000 were suicides and 70,000 were drug overdoses.

If you want to understand why life expectancy is decreasing in America, the state of West Virginia may offer some answers.

Maggie Hill has lived in West Virginia for all of her life. Hill, who is 67, told the Associated Press about the many deaths in her family. An older brother drowned in a flood. A sister died in a house fire. Two siblings, both who smoked, died of lung cancer. Two others died at birth. Her first husband died of heart failure.

Then there were the suicides. Two of her three sons shot themselves to death. Her second husband killed himself one Sunday morning while she was still in bed.

"I don't think people have a lot to live for," hill said. "I really and truly don't see things getting better." 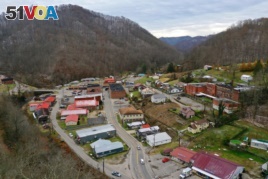 This Thursday, Nov. 29, 2018 photo shows Delbarton, W.Va.The state eclipses most others in the percentage of people affected by diabetes, heart disease and obesity. (AP Photo/Tyler Evert)

Dr. Michael Brumage is a public health expert at West Virginia University. He used to run the health department in Charleston, West Virginia. He said, "It seems that the worst outcomes happen here first."

The nation's suicide rate today is where West Virginia's was nearly 20 years ago.

West Virginia also has more people affected by diabetes, heart disease and obesity than most other American states.

Ten years ago, the AP described the West Virginia city of Huntington as the unhealthiest place in America. The finding was based on health information from the Centers for Disease Control and Prevention. The report led the city and the wider area to make changes to food served at schools. The area also made improvements to parks and sidewalks in an effort to fight obesity and related health problems.

As the city was trying to deal with its citizens' weight problems, a new health crisis came to Huntington: opioid addiction.

There are several new projects around the state that aim to get children to exercise and eat healthier foods.

Kayla Wright is director of an organization called Try This West Virginia. The organization is paying for many of the projects. She said, "We want to give people hope that we can be knocked off the unhealthiest list" of states. One program paid for high school students to build a running trail. Another helped people learn to grow a garden.

In Williamson County, local leaders — led by a young doctor named C. Donovan Beckett — developed a series of programs aimed at creating a culture of health. 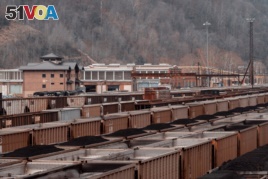 They opened the Williamson Health and Wellness Center for free medical care. They set up a community garden, a vegetable delivery service and a running club. In the coming year, there will be a federally funded treatment program for people addicted to drugs.

One of the most successful programs is one that sends health workers to the homes of people with diabetes.

Jamie Muncy is one success story.

The 48-year-old lost his job and his marriage was in ruins. Last fall, he finally stopped taking opioids. He began taking the drug after he hurt his foot.

His weight went from 75 kilograms to 89 kilograms. He had high blood sugar levels. A doctor from Williamson Center put him on a special diet, connected him with a physical therapist and put him in the home-visit diabetes program.

Now Muncy walks 1.6 kilometer a day and buys vegetables at the farmers' market. The changes to his everyday life have helped him bring his weight down to 66 kilograms.

As for Maggie Hill, the lifelong West Virginian, she adopted Charity, a young girl her son had been raising. He lost his right to raise Charity because of his continued struggle with drug addiction.

Charity has given Hill's life a sense of purpose, she said.

Charity, who is 10, is a good student and hopes to go to college. If Charity does go away to college one day, Hill says she will move there with her.

Mike Stobbe reported this story for the Associated Press. Hai Do adapted the story for Learning English. Ashley Thompson was the editor.

overdose - n. an amount of drug or medicine that is too much and dangerous

outcome - n. something that happens as a result of an activity or process

knock off - v. to remove or stop something