Why Indonesia’s Children Are Not Growing

Update Required To play the media you will need to either update your browser to a recent version or update your Flash plugin.
By Jonathan Evans
14 October, 2018

Studies show that many Indonesian children are stunted in their growth. They fail to grow as large as their parents. They also develop at a slower rate than healthy boys and girls.

A World Bank publication reports that 37% of Indonesia's children were stunted in 2013. That percentage is similar to some poor African countries south of the Sahara Desert. The bank noted that stunting can limit a child's physical and mental abilities and cause lifelong damage. 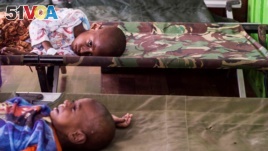 FILE - Two sick children wait for treatment after being admited to a hospital in Agats, Asmat District, after the government dispatched military and medical personnel to the remote region of Papua to combat malnutrition and measles, Indonesia, Jan. 22, 2018. (Antara Foto/M Agung Rajasa/ via REUTERS)

Now, the Indonesian government is declaring war on childhood stunting. The health ministry and other government agencies have worked to fight the problem for years. But the administration of President Joko "Jokowi" Widodo has made dealing with stunting an issue of national importance. He talked about it in an Independence Day speech last year.

Health experts say the first 1,000 days of a child's life are important in preventing stunting. They say children require good nutrition, stimulation and activity, clean water and timely treatment of conditions like diarrhea and malaria.

Stunting affects more than one in three Indonesian children. That means about 9 million children in Southeast Asia's most populous country are suffering from developmental limitations.

The poorest areas have the highest rates of childhood stunting. The eastern province of Nusa Tenggara Timur has a 52 percent rate, the country's highest. But stunting affects developed areas, with some rates among the wealthy as high as 29 percent.

Doctor Brian Sriprahastuti serves as an advisor to the Indonesian president on the issue of stunting. He said the reasons for the stunting problem today go beyond the usual issues of poverty and limited access to public services. He said that officials believe "that behavior is the main problem of this stunting issue."

In the World Bank publication, Jokowi called current stunting rates "unacceptable." He promised to prevent two million children from being stunted by 2021. He said that ending stunting is "a main priority" for our government.

Jim Yong Kim is President of the World Bank Group. He said the Indonesian government is investing in what he said are "evidence-based interventions" across 100 districts. He added that the government plans to expand the program to all 541 districts by 2021.

Sriprahastuti of the President's Office said that the government was accepting a human rights-based approach. He said, "For all pregnant women in Indonesia, everywhere, for all children under two, everywhere, we have to support them."

Claudia Rokx is a World Bank health specialist. She said Indonesian officials know "they have a huge problem...and are ready to do something about it."

She added, "Everything is in place for them to do it well, they just have to coordinate better, be persistent and make sure that these kids get the best start in life they can get."

Max Walden reported this story for VOA News. Jonathan Evans adapted it for Learning English. George Grow was the editor.

stimulation – n. the act of inciting growth or activity

access – n. the ability to enter or pass something; freedom to use something

beyond – adv. on the farther side; in addition