Why Is It so Hard to End Coal Burning?

Update Required To play the media you will need to either update your browser to a recent version or update your Flash plugin.
By Dan Friedell
01 November 2021


This week at the United Nations climate change conference, leaders are talking about ways to end the world's dependence on coal for fuel.

Alok Sharma represents Great Britain. He said the world needs to leave coal "in the past where it belongs."

Some wealthy nations may be able to put technology in place to reduce their need for coal. But developing countries like India will not be able to make such a change so easily.

Take, for example, a worker named Raju. He lives in the city of Dhanbad in eastern India. He steals coal from mines and takes it to people who will sell it. The Associated Press news agency talked with Raju about his work.

He told the AP he gets paid about $2 for his delivery. Each delivery contains up to 200 kilograms of coal tied to his bicycle. He rides the heavy bicycle about 16 kilometers from the mines to the buyers during the night so he cannot be seen by police. 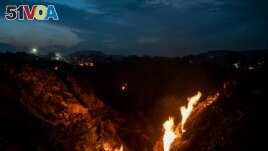 Flames rise out of the fissures on the ground above coal mines in the village of Liloripathra near Dhanbad, an eastern Indian city in Jharkhand state, Sept. 23, 2021. (AP Photo/Altaf Qadri)

He is one of thousands of people who do the same to earn a small amount of money.

Raju's work is one example of how the world's economy depends on coal. He once worked on a farm. However, flooding in the area took away most jobs. Now, he can only make a living delivering coal.

Climate change -- caused in part by burning coal – led to the flooding that made Raju find a new job.

It is a sad story, he said, but "so many people, they've been saved by coal."

Developing countries say they should be permitted to burn coal for power, just as the wealthy countries did in the past. They argue that the wealthy nations got rich by burning coal to make steel and send electricity to factories.

In India, many people live without electricity. However, that may change as more people will need air conditioning as temperatures rise.

Coal India wants to solve India's energy problems by mining more coal. By 2024, it expects to mine over 900 million metric tons per year.

D.D. Ramanandan represents the Center of Indian Trade Unions. He said talks about moving away from coal are only happening in places like Paris, Glasgow and New Dehli. In the industrial parts of India, people have used coal for 100 years, he said, and they will continue to do so.

Experts say this way of thinking in India will hurt the planet overall. It will also hurt Jharkhand, the part of India that produces the most coal.

Sandeep Pai studies energy and climate change for the Center for Strategic and International Studies in Washington, D.C. He sees the problem. Millions of people in India make a living from coal. Some are employed by coal mines. Others work for businesses that make steel and brick. Their power comes from burning coal. India's railways are the largest employers in the country. Much of their money comes from moving coal.

"Coal is an ecosystem," Pai said.

The economic slowdown that came from the COVID-19 health crisis hurt some people in India. People who used to work other jobs, like driving taxis, do not have as many customers.

In the mining region of Dhanbad, coal is the only work there is.

Naresh Chauhan and his wife, Rina Devi, make $3 per day selling coal. If the coal mines close, they will not be able to do anything else.

As renewable energy becomes less costly, the demand for coal will go down and people who work in coal will not earn as much. Pai said countries whose economies depend on coal will need to teach workers how to do other jobs.

Murti Devi is 32. She is a single mother of four children. She lost her job at a coal mine four years ago. The only thing she can do is look for coal to sell to traders. She might make $1 on some days. Other days she makes no money and must ask others for help.

Dan Friedell adapted this story for Learning English based on a report by Aniruddha Ghosal of The Associated Press. Ashley Thompson was the editor.

What can India do to help workers who depend on coal to make money? Tell us in the Comments Section and visit 51VOA.COM.

greenhouse gas – n. gas from the burning of fuel that traps warmth in the Earth's atmosphere

air conditioning – n. a system used for cooling and drying the air in a building, room, etc.

ecosystem – v. everything that exists in a particular environment