Why Is the Military Taking Control in Myanmar?

Update Required To play the media you will need to either update your browser to a recent version or update your Flash plugin.
By Susan Shand
01 February 2021


Myanmar's military has taken control of the country, ordering a one-year state of emergency. Reports say State Counsellor Aung San Suu Kyi and other government leaders have been detained.

The announcement on military-owned Myawaddy TV said Article 417 of the country's constitution permits the military to take over in times of emergency. The announcer said the coronavirus crisis and the government's failure to postpone November elections were reasons for the emergency.

The military wrote Myanmar's constitution in 2008. The country is also known as Burma. The document gives the military the most power in the country and places limits on democratic, civilian rule. The group Human Rights Watch has described Article 417 as little more than an excuse for the military to seize all power.

The constitution also provides important Cabinet ministries and 25 percent of the seats in Parliament to the military. This limits the power of a civilian government and rules out changing the constitution without military support.

Some experts said they were uncertain why the military would change or destabilize their standing. Others, however, noted the upcoming retirement of Senior General Min Aung Hlaing, who has been leader of the armed forces since 2011.

There is "military politics around that, which is very opaque," said Kim Jolliffe. He is an expert on Myanmar civilian and military relations. The military has put Vice President Myint Swe in office as head of the government for one year. He is a former military officer. 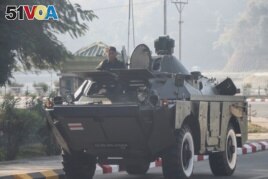 Myanmar's military checkpoint is seen on the way to the congress compound in Naypyitaw, Myanmar, February 1, 2021. REUTERS/Stringer

In the November elections, Suu Kyi's party got 396 out of 476 seats in the lower and upper houses of Parliament. The state Union Election Commission confirmed that result.

But, beginning right after the elections, the military has said there were millions of problems with voter lists in 314 townships. This could have let some voters cast more than one ballot or break other voting rules. "But they haven't really shown any proof of that," Jolliffe said.

The election commission rejected the military's claims last week. It said there was no evidence to support them. The military takeover came on what should have been the first day of the new Parliament. But the new Parliament did not open. Instead, Suu Kyi and other lawmakers were reported detained.

A later announcement on Myawaddy TV said the military would hold an election after the one-year emergency ends. The winner of that election will lead the country, the military said.

Telecommunications came almost to a complete stop on Monday. In the capital, the internet and phones seemed to be blocked. Those who could still get on the internet found their social media accounts had been temporarily suspended. Road blocks were set up across Yangon, the largest city. Soldiers took up positions outside government buildings such as City Hall.

Governments and international organizations have condemned the takeover. They said it sets back the few democratic reforms Myanmar has made.

Linda Lakhdhir is a legal adviser at Human Rights Watch. She described the takeover as a "blow to efforts to present Myanmar as a democracy. She added that the country's "creditability" has been damaged.

Myanmar experts are afraid the country is going to enter a difficult time for human rights defenders, reporters and those who are critical of the military. Even before the military takeover, some reporters and free speech supporters faced legal problems.

The U.S. Senator, Bob Menendez, a Democrat, said Myanmar's military leaders "must immediately free the democratic leaders of Myanmar and remove themselves from government." Menendez is the new chairman of the Senate Foreign Relations Committee.

Menendez added that, if they do not free those detained, the U.S. should use sanctions.

Aung San Suu Kyi came to power in 2015. However, she was strongly criticized in 2019 for failing to protect the Rohingya Muslim people from the Myanmar military. She defended the military's actions against the Rohingya, which United Nations agencies have called genocide.

destabilize – v. to cause something, such as a government, to be unable to work in a usual or desired way; to make unstable

proof – n. evidence that something is true

sanctions – n. measures taken to cause a country to obey international law usually through restricting trade