Why Is the News Always Breaking?

Update Required To play the media you will need to either update your browser to a recent version or update your Flash plugin.
By Jill Robbins
25 March 2021


One of our readers recently asked about the word 'breaking.'

"I know about the word 'breaking,' as in 'breaking glass.' But what does it mean in 'breaking news'? And what is the meaning of 'breaking bad'?"

If you watch television news broadcasts from the United States, you often see the words "breaking news." 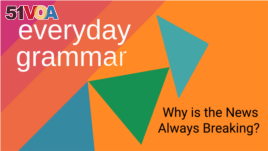 The noun "break" can mean something that causes a change or a delay in an action. You may hear a teacher say, "We will take a 10-minute break." Or you might enjoy a "coffee break," a few minutes away from work.

We have used the word "break" to mean to make "a first and partial disclosure," that is, to make something known to the public, for a long time. The Online Etymology Dictionary says the word has been used this way for more than 750 years.

In the news business, to "break a story" means to have the first report on the story. With social media like Twitter and Instagram, newsmakers and reporters can immediately send messages to the public. Being the first to report on an event or having an original story -- a "scoop" as reporters call it -- is becoming more difficult.

In the past, when there was a disaster or an important news event, reporters would interrupt a regular television or radio broadcast. They often said, "We interrupt this program for an important announcement." They did not use the words "breaking news" because it was clear they were "breaking into" the regular program.

Some media organizations still use the term "breaking news" to describe such an unusual report. But on many other news programs, the words "breaking news" appear every day, without a real interruption to the normal broadcast. They seem to simply mean that there is a news report coming up. It is probably not an original story.

The Cambridge Dictionary has a more up-to-date definition for "breaking news." That is, "information that is being received and broadcast about an event that has just happened or just begun."

The creator of the series, Vince Gilligan, was born in Richmond, Virginia. Gilligan told the American Film Institute that when he wrote the story, he gave it that name because he thought it was a commonly known expression. When he was growing up in Southern Virginia, the term "break bad" meant to "go wild" or to "break the law." Gilligan said you might hear someone say, "I was out the other night at the bar...and I really broke bad," ending up in a police car, for example.

Breaking Bad's main character, Walter White, goes from a person you like to someone you hate. So "breaking bad" means for a good person to start doing bad things. The term is not very common, but it does appear in some movies and other television programs. In the 2016 movie, Fishes 'n' Loaves: Heaven Sent, a character says,

Well, I mean, I guess we have our share of good old boys who break bad every now and again...

My advice to our readers is to understand that the words "breaking news" mean a broadcaster simply wants you to pay attention to their report. And I also advise you to stay away from anyone who is "breaking bad!"

interrupt –v. to cause (something) to stop happening for a time

original – adj. made or produced first; not a copy

What expressions do you know with the word "breaking" We want to hear from you. Write to us in the Comments Section.