Why Is There a Decrease of Worldwide Oil-refining?

Update Required To play the media you will need to either update your browser to a recent version or update your Flash plugin.
By Gregory Stachel
24 June 2022

Prices were already up before Russia invaded Ukraine on February 24. But since the middle of March, fuel costs have greatly increased while crude prices are only moderately high.

A big reason for the cost increase is the lack of refining ability to process crude into gasoline and other fuel to meet high worldwide demand. 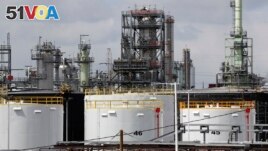 Information from the International Energy Agency (IEA) shows that the world can refine about 100 million barrels of oil a day. A barrel contains 159 liters of oil.

But almost 20 percent of that is not useable. Much of the unusable oil comes from places where there is a lack of investment.

The refining industry estimates that the world lost a total of 3.3 million barrels worth of daily refining ability since the start of 2020.

About a third of these losses happened in the United States, with the rest in Russia, China, and Europe, the experts say. Fuel demand crashed early in the pandemic. Before that, oil refining ability had not fallen in any year for at least 30.

The IEA expects refining to rise during the summer to 81.9 million barrels per day, when Chinese refiners return to normal operations.

The United States, China, Russia, and Europe are all operating refineries at a lower ability than before the pandemic. Nearly 30 percent of Russia's processing ability was stopped in May, sources told Reuters. Many Western nations are not accepting Russian fuel.

Other reasons for high prices

The cost to carry products on ships overseas has risen because of high demand around the world and sanctions on Russian ships. In Europe, refineries are limited by high prices for natural gas, which powers their operations.

Refiners that export a lot of fuel to other countries, such as U.S. refiners, are benefiting from the current situation. World fuel shortages have increased refining profit margins to historic highs. Companies like U.S.-based Valero and India-based Reliance Industries have seen large profits.

The IEA said India, which refines more than 5 million barrels per day, has been importing cheap Russian crude for in-country use and export.

crude – n. oil as it exists in the ground: petroleum that is not yet ready to be used as fuel

refine – v. to remove the unwanted substances in (something)

barrel – n. the amount of something in a barrel

margin – n. the difference between the cost of buying or making something and the price at which it is sold