Why Some International Students Are Bypassing American Colleges

Update Required To play the media you will need to either update your browser to a recent version or update your Flash plugin.
By Bruce Alpert
20 May, 2017


American University graduate student Kwame Gayle said he was angry when someone hung bananas from nooses on campus. It occurred the same day a black woman became student government president.

Gayle, from Jamaica, recently graduated with a master's degree in international education. He said, "I found the entire incident disturbing, but also that some of the conversations we had involved explaining to people why it was so wrong."

There are many reasons why American University officials called the incident racist. The nooses were once used to hang black people.

Gayle said he doesn't know whether the banana incident and other hate incidents at other colleges will cause foreign students to reconsider attending college in the United States.

"I think there's long been a realization that as a person of color, you may run into situations or issues connected to race," he said.

Research in February by higher education groups found that 38 percent of the 250 colleges questioned reported a drop in international student applications.

Just last year, the number of international students at American colleges topped one million for the first time ever, according to the Institute of International Education.

Margaret Everett is Vice Provost for Internationalization and Dean of Graduate Studies at Portland State University. The school has seen a big drop -- about 23 percent – of graduate applicants from India.

Everett said a change in India's currency makes American colleges more expensive. The other reasons for the decrease are concerns about immigration policies and fears of violence.

The concerns about violence followed the February shooting in Kansas of two engineers from India, she said. One of the men died. The man accused of the shooting told the engineers that they did not belong in the United States, witnesses told police.

"As a parent myself, I would imagine having all sorts of concerns about even adult children and whether they will be safe and treated well thousands of miles from home," Everett said.

Incidents at other colleges

American is not the only college to report recent incidents of hateful behavior. At the University of Maryland, someone hung posters in March that said "America is a white nation" and that many immigrants should be sent home.

Also in March, someone dropped two copies of the Quran, the Muslim holy book, inside a toilet at the University of Texas at Dallas.

Bilal Ayub is president of Alpha Lambda Mu at the University of Texas at Dallas. It is one of seven mostly Muslim fraternities at American college campuses. He called the Quran incident very troubling. But he said it is not representative of his college, where one out of four students are from outside the U.S.

"There have been cases, again isolated, but I think we feel safe and feel like we have a place at the University of Texas, Dallas that always has been supportive of diversity," said Ayub. He is nearing degrees next year in business. 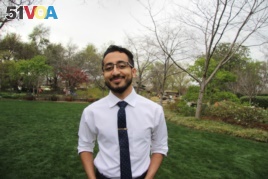 Colleges trying to be more welcoming

Ivan Baquerizo is a real estate developer and engineer from Ecuador in South America. He attended Tufts University in Massachusetts in the late 1980s as an international student.

Now, he has one daughter studying architecture at Pratt Institute in New York. One son is about to study engineering at Lafayette College in Pennsylvania and another is applying to American colleges.

"As a parent, of course I worry," Baquerizo said of reports of new immigration policies and hostility toward international students. But he believes attending a good American college "is the best life experience someone can have."

banana - n. a long curved fruit with a thick peel that is yellow when it is ripe

noose - n. a large loop at the end of a rope that gets smaller when you pull the rope and that is used to hang people

application - n. a formal and usually written request for something such as admission to a school

bar - n. a business where alcoholic drinks are sold

toilet - n. a large bowl attached to a pipe that is used for getting rid of bodily waste and then flushed with water

fraternity - n. an organization of male students at a U.S. college

architecture - n. the art or science of designing and creating buildings