Update Required To play the media you will need to either update your browser to a recent version or update your Flash plugin.
By Jeri Watson
04 October, 2014


Now, the VOA Special English program Words and Their Stories.

Today, we tell about the word "wildcat."

Humans have always depended on animals. From the beginning of human history, wild animals provided food, clothing and sometimes medicine.

We may not depend as much on wild animals now. But we hear about them every day. Americans use the names of animals in many ways.

Many companies use animals to make us want to buy their goods. Automobile companies, for example, love to show fast horses when they are trying to sell their cars. They also name their cars for other fast powerful animals.

Automobile manufacturers and gasoline companies especially like to use big cats to sell their products. They like lions, tigers and wildcats.

When Americans say "wildcat," they usually mean a lynx, an ocelot or a bobcat. All these cats attack quickly and fiercely. So wildcats represent something fast and fierce.

An early American use of the word "wildcat" was quite different. It was used to describe members of Congress who declared war on Britain in 1812. A magazine of that year said "the wildcat congressmen went home." It said they were unable to face the responsibility of having involved their country in an unnecessary war.

"Wildcat" also has been used as a name for money. It was used this way in the 1800s. At that time, some states permitted banks to make their own money. One bank in the state of Michigan offered paper money with a picture of a wildcat on it.

Some banks, however, did not have enough gold to support all the paper money they offered. So the money had little or no value. It was called a "wildcat bill" or a "wildcat bank note." The banks who offered this money were called "wildcat banks."

A newspaper of the time said those were the days of "wildcat money." It said a man might be rich in the morning and poor by night.

"Wildcat" was used in another way in the 1800s. It was used for an oil well or gold mine that had almost no oil or gold in it. Dishonest developers would buy such property. Then they would sell it and leave town with the money. The buyers were left with worthless holes in the ground. Today, wildcat oil wells are in areas that are not known to have oil.

Yet another kind of wildcat is the "wildcat strike." That is a strike called without official approval by a union. During World War II, an American publication accused wildcat strikers of slowing government production.

This VOA Special English program Words and Their Stories was written by Jeri Watson. 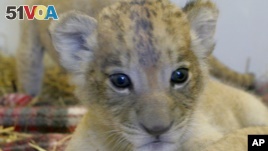 A new baby lion cub on display at the Riverbanks Zoo and Garden in Columbia, S.C.