Update Required To play the media you will need to either update your browser to a recent version or update your Flash plugin.
By Hai Do
29 June 2021


Brazil's president is sending troops back to the Amazon to enforce laws against cutting down trees and other land clearance activity. The redeployment comes just two months after troops withdrew from the area.

President Jair Bolsonaro ordered soldiers to go to the states of Pará, Amazonas, Mato Grosso, and Rondonia through the end of August. The order was announced on official Brazilian media Monday. It did not report about the number of troops to be deployed or the cost of the operation.

Vice President Hamilton Mourao told reporters earlier this month that the deployment could be extended beyond two months with the arrival of the dry season. That is the time when people burn the forest to clear land for farming and raising animals.

Amazon deforestation has slowly increased for several years. It rose very fast after the 2018 election of Bolsonaro, who had repeatedly called for the development of the rainforest.

This will mark the third time that Bolsonaro has sent troops to the Amazon. Thousands of soldiers took part each time. But, environmental experts say the military was poorly prepared for such work and had limited effect. 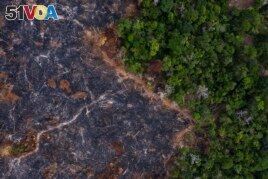 In this Nov. 23, 2019 photo, a burned area of the Amazon rainforest is seen in Prainha, Para state, Brazil.

The MapBiomas Project is a group of nonprofits, universities, and technology companies that studies Brazilian land use. The group said 98.9 percent of deforestation activities last year were illegal. But, MapBiomas noted that the government ordered fines in just five percent of the deforestation cases.

Márcio Astrini is with the Climate Observatory, a network of environmental nonprofit groups. He called the latest military deployment a "smokescreen," suggesting that the government deploys troops to create the appearance that it is fighting deforestation.

He noted that a successful program financed by the Norwegian and German governments to fight Amazon deforestation was suspended in 2019. It has not been restarted.

"The government has adopted a series of measures that simply destroys the state's monitoring capacity, like stopping environmental fines,″ Astrini said. He added that Brazilian officials have also ceased destroying machinery used for illegal tree removal.

The Associated Press spoke to several Brazilian government officials on the condition that they not be identified. They told the AP that talks had stopped between the U.S. and Brazil's environment ministry. One of the officials said that the redeployment was ordered in part to show the U.S. that Brazil has good intentions on the issue.

Debora Alvares reported this story for the Associated Press. Hai Do adapted the story for Learning English. Caty Weaver was the editor.

capacity - n. ability to do something

intention - n. the thing that you plan to do