Will Cricket Score Points in the US?

Update Required To play the media you will need to either update your browser to a recent version or update your Flash plugin.
By VOA
12 October, 2015


Two teams of cricket players will compete in three large American cities in November. They hope Americans will learn more about the sport and begin watching it -- and even playing it.

Organizers have been working on the project for about a year.

Football -- or what Americans call "soccer" -- has for many years been the most popular sport in the world. Cricket is the second-most popular sport. From Harare to Wellington, London to Islamabad, many people follow cricket like a religion. Players gain fame and launch political careers in Pakistan and India. 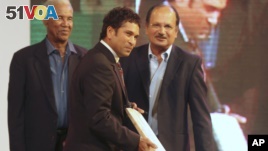 Cricket officials believe the sport has a chance of becoming more popular in the United States. With an increasing number of immigrants to the country from South Asia, the Caribbean, Australia and New Zealand, cricket is becoming better known. But it competes with basketball, American football, ice hockey and baseball.

It is believed cricket began in England. It is similar to baseball: Both are played with a bat and a ball, for example, and there are batters, outs and pitches. A "pitcher" in baseball is called a "bowler" in cricket. Some historians say early baseball players learned to bat by playing cricket.

But baseball and cricket are also very different from one another. In baseball, when the batter hits a home run, they touch all of the bases then go sit on the team's bench. In cricket, when a batsman hits a home run they continue to bat until they are "out" or until a set number of pitches are completed. Like baseball, whichever team scores the most runs is the winner of the game.

For many years, cricket matches lasted for days. But now, most games are played in one day. In India, the game is sometimes played in just three to four hours. This popular version of the game is known as Twenty20.

That is the version of the game that the two teams will be playing in cities throughout the United States. Time magazine reports some of the most popular cricket players in the world will be on the teams. The teams will have some of the best international players from the past 25 years. Two famous cricket stars -- Sachin Tendulkar and Shane Warne -- are the teams' leaders. They are known by hundreds of millions of people throughout the world. But almost no one in the United States has ever heard of them.

In 2012, Mr. Tendulkar was on the cover of the famous magazine. It called him "The God of Cricket," and said he was "the world's most famous sportsman" and "the world's best athlete."

Mr. Tendulkar recently told the magazine he believes Americans will become fans of the game once they see it played.

"You'll only learn things if you give them a try," he said. "Americans are used to watching baseball and it's very similar to that. If Americans can start coming to the stadium, I wouldn't be surprised to see them" begin to watch cricket.

The games will be played in baseball stadiums in New York City, Houston and Los Angeles. The cities were chosen because many people who live there are already interested in cricket and because they have large numbers of people from the Caribbean or South Asia.

At the games, the players will teach Americans how to play cricket. And people will be given a small book telling them about the sport.

Mr. Warne says he hopes the games will answer such questions as: "What's all the fuss about? Why is it the second-most-popular game in the world? What's so special about this game?"

Love cricket? Share some inside knowledge about the sport in our Comments section, or on 51VOA.COM.

Christopher Jones-Cruise wrote this story for VOA Learning English. Hai Do was the editor.

page views – n. the total number of times website visitors look at a page or pages on a particular website

star – n. an extremely famous and successful performer or athlete

stadium – n. a very large usually roofless building that has a large open area surrounded by many rows of seats and that is used for sports events and concerts

fuss – n. activity or excitement that is unusual and that often is not wanted or necessary