Update Required To play the media you will need to either update your browser to a recent version or update your Flash plugin.
By Bryan Lynn
22 January, 2017


Populist movements are making major gains across the world with the inauguration of Donald Trump as the 45th president of the United States.

In his inauguration speech, Trump spoke of his strong desire to put the interests of Americans first, above all else.

Trump said his administration will seek "friendship and goodwill" with other nations. But he added: "We do so with the understanding that it is the right of all nations to put their own interests first."

"We must protect our borders from the ravages of other countries making our products, stealing our companies, and destroying our jobs," he said. "Protection will lead to great prosperity and strength."

In the past, Trump has questioned the relevance of the 67-year-old NATO military alliance. During his speech, he said the United States will aim to "reinforce old alliances and form new ones."

Trump has repeatedly promised to build a wall along the southern U.S. border to keep illegal immigrants out. He also called for severe immigration enforcement measures for people already in the U.S.

Thomas Greven is a political science professor at Germany's Free University of Berlin. He says Trump won the presidency with a message of economic protectionism and tough immigration reforms.

He said Trump could give a boost to other populist movements around the world, depending on how he handles his first months in office.

"Now right-wing populists everywhere who feel validated by Trump's victory will have to account - to a certain extent - for everything he does and says."

But Greven said Trump could disappoint supporters both at home and abroad if his policies end up offending other nations.

"An international movement of nationalists is frail because they end up offending each other," he said.

Similar policies have been used by political movements in other countries as a way to win votes. 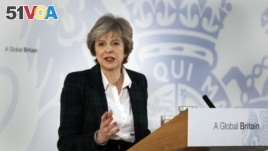 One of the biggest examples was last year's Brexit referendum, in which British citizens voted to leave the European Union. The campaign for Britain leaving the E.U. also focused heavily on immigration issues. It said Britain was not able to effectively control the number of immigrants because of E.U. rules.

The Brexit movement believed the E.U. imposed too many regulations in Britain. It also argued that its leaders were not accountable to the British government or its citizens.

Trump has repeatedly praised Britain's decision to leave the E.U. He recently said in an interview that Brexit would "end up being a great thing." He predicted that more E.U. members would choose to leave, mainly because of immigration problems in Europe.

"If refugees keep pouring into different parts of Europe, I think it's going to be very hard to keep it together, because people are angry about it," Trump said.

Immigration, an issue in Germany's election

Trump has also criticized German Chancellor Angela Merkel for that country's decision to open its borders in 2015 to about one million refugees. Most of the refugees were Muslims fleeing war in the Middle East. Trump called the action "a catastrophic mistake."

Merkel is seeking a fourth term as chancellor in elections to be held in September. Her popularity has dropped since the refugee crisis.

Last month, a man drove a truck through a Christmas market in Berlin, killing 12 people. The anti-immigration Alternative for Germany party (AfD) blamed Merkel's immigration policies for allowing the attack to happen.

Professor Greven said the AfD will win a presence in parliament and is likely to make bigger gains at the state level.

Currently, Merkel's CDU-led alliance is leading in polls against the AfD. But even if her party wins in September, she will likely have to form a coalition government with other parties.

Rise of National Front in France

In France, the leader of the far-right National Front (NF), Marine Le Pen, is a leading candidate for that country's presidential election in April. She has said she believes Trump's win and the Brexit vote have helped her campaign.

During a recent interview, Le Pen outlined some of her priorities if she won the presidency. She said she would hold a referendum on leaving the E.U., close French borders and push for an alliance with Russia and the United States to fight Islamist terrorism.

Greven said France's National Front has moved on from being the party of the lower middle class to more of a working class party. It is now appealing to a larger number of voters, including former communists and socialists, he added.

Other politicians in Europe have also faced strong opposition from populist or nationalist candidates.

Populist Movement in other EU nations

In Italy, Prime Minister Matteo Renzi resigned in December after losing to populist and national parties in a referendum over constitutional reforms.

In the Netherlands, recent polls showed continued strong support for far-right politician Geert Wilders ahead of a general election in March.

Wilders and his Freedom Party have repeatedly made statements against Islam and Muslim immigration. Wilders himself was found guilty of inciting discrimination and insulting a minority group. The charges came after he led a chant at a meeting calling for the Netherlands to accept fewer Moroccan immigrants.

Bryan Lynn wrote this story for VOA Learning English, with information coming from VOA News, the Associated Press and Reuters. Hai Do was the editor.

elite – n. the richest and most powerful group in society

prosperity – n. being successful, usually by making a lot of money

manipulate – v. to control someone or something into doing what you want them to do

accountable – adj. being responsible for something

incite – v. to cause something to happen

chant – n. the repeated saying of a word, phrase or slogan by a crowd