Will Latino Vote Decide Next US President?

Update Required To play the media you will need to either update your browser to a recent version or update your Flash plugin.
By Susan Shand
03 October, 2019


Johanny Cepeda-Freytiz says it has been a struggle to educate Latinos in the United States about their growing strength as voters.

Cepeda-Freytiz owns an eatery. She also is the only Latino on the six-member city council in Reading, Pennsylvania.

More than 50 years ago, a group of Puerto Ricans moved to Reading to work in agriculture. Since then, the city's Latino population has grown 65 percent. They now outnumber Reading's traditional base of white Protestants with German ancestry.

Cepeda-Freytiz was born in New York City of parents from the Dominican Republic. She told VOA that some of her non-Latino neighbors suspect she is not a U.S. citizen. They accused her of "buying her papers" after she was elected to the local government.

'Latino community is going to make a difference'

Suspicion from whites and indifference from Latinos may explain why Reading has never had a Hispanic mayor.

Eddie Moran is vice president of the Reading school board. He wants to become the city's first Hispanic mayor in elections later this year. He also is watching the U.S. presidential election campaign.

"I think next year...the Latino community is going to make a difference in this electoral campaign," he said.

The 32 million Latinos registered to vote in the 2020 presidential election will make them the largest racial or ethnic voting bloc in the country. They just may decide if President Donald Trump is re-elected.

"For Democrats, it's critical that they hold on to the Latino vote, and for Republicans that they gain support among Latino voters," said G. Terry Madonna. He directs the Center for Politics and Public Affairs at Franklin & Marshall College.

Seventy-three percent of Latinos nationwide plan to vote or think they may vote for the Democratic Party's presidential nominee in 2020. That information comes from a recent study of likely voters by the television broadcaster Univision.

Some political observers say the most important areas to watch next year are parts of Texas along the Mexican border, Orange County in Florida and Las Vegas in Nevada. All these areas have many Hispanic voters. 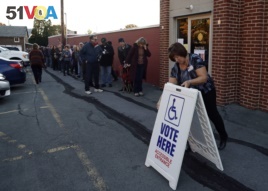 FILE - An election official places a sign as voters line up outside a polling place at the Fogelsville Volunteer Fire Co., Tuesday, Nov. 8, 2016, in Fogelsville, Pa. (AP Photo/Matt Slocum)

The State of Pennsylvania

Then there is the eastern state of Pennsylvania, which has experienced a 28 percent increase in its Hispanic population over the past 10 years.

Pennsylvania chose Trump over Democrat Hillary Clinton in the 2016 elections. Pennsylvania, Texas, Florida and Nevada may influence the election results next year.

Many Latinos have moved to Reading, the once-wealthy, former industrial city , to join other Latinos. In 2011, The New York Times reported that Reading was the poorest city in the nation. The area's Latino community has spread out along what is now known as the Route 222 Latino corridor. It makes up more than 50 percent of Pennsylvania's Hispanic population.

Businesswoman Angel Figueroa was the first Puerto Rican elected to Reading's city council in 2002. She organized the parade and festival. Figueroa points to Reading's importance in the 2020 elections.

"With all of the hate and rhetoric that's been going on," Figueroa said. "I think it's time that as a (group), that we send a message to both political parties."

While some Hispanics blame Trump for divisive language, about 30 percent of Americans of Hispanic ancestry voted for him in 2016. He has many supporters in Reading, like Nancy Rodriguez and Junior Cruz-Morales.

"I support him because I've seen more opportunities for Latinos, and he's been focusing more on the Latino community," Rodriquez said.

Her husband, Cruz-Morales, agreed. "We voted for Donald Trump, and he's doing a good job. I'm not sure if he's going to get four more years, but if he does, we welcome that."

Unemployment among Hispanics nationally is a low 4.2 percent. Trump has claimed credit for that number repeatedly at his political campaign events.

Trump won Pennsylvania in 2016 by less than 1 percent -- the narrowest margin in a presidential election in the state in 176 years.

Many Democrats say they are sure that the city's Latino voters will support their party's nominee next year. Others are not so sure.

"Dissatisfaction with the...president will not be enough to get Latinos to vote," said Grecia Lima. She is the political director for Community Change Action in Washington. She added that getting Latinos to vote will require one-on-one contacts with the candidates' "trusted messengers."

Texas has the second highest number of Hispanics after California. Republican Party officials say their research shows a 20 percent increase in support for Trump since 2016.

"That means he has nearly 1 million new Hispanic supporters!" tweeted the chairwoman of the Republican National Committee, Ronna McDaniel.

The Trump re-election campaign is trying to extend its appeal to other states with large Latino populations, including New Mexico. Trump lost New Mexico to Clinton in 2016 by more than 8 percent.

One thing is sure about Hispanic voters nationwide between now and November of 2020, noted G. Terry Madonna.

"They're going to be continually courted by the candidates," he said.

mayor – n. an official elected or appointed to act as head of a city or town

bloc – n. a combination of people or groups uniting together with a common purpose

rhetoric – n. language that is intended to influence people and that may not be honest or reasonable

opportunity – n. a chance or possibility

messenger – n. someone who delivers a message or does other small jobs that involve going somewhere

court –v. to try to win over