Update Required To play the media you will need to either update your browser to a recent version or update your Flash plugin.
By John Russell
24 May 2020


For centuries, people have kept large amounts of cash at home during difficult times. But in the coronavirus crisis, things are different. These metal coins and paper bills can be a source of worry rather than hope.

The fear is that these objects, possibly touched by thousands of people, could be a way for the coronavirus to spread. Public officials and health experts have said that the risk is small. Still, some businesses refuse to accept them, and some countries have suggested that their citizens should stop using them altogether.

Zachary Cohle is an economics professor at Quinnipiac University in Connecticut. "In many areas, cash was already beginning to disappear due the increased risk of robbery, the ease of internet ordering, and the ubiquity of cell phones," he said. The term ubiquity refers to something being seen everywhere.

Sweden, Finland, Norway, Canada and others have slowly reduced cash use to the point where using it in large amounts seems unusual. Britain and Australia are expected to become cashless countries. And in China, cash use has dropped as electronic payment services increased in popularity over the past ten years. 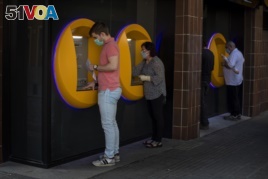 FILE - In this May 5, 2020, file photo, people wearing face masks use cash machines in Caldas de Montbui, near Barcelona, Spain. The coronavirus pandemic has reawakened debate about the continued viability of what has been the physical lifeblood of global economies: paper money and coins. (AP Photo/Emilio Morenatti)

"Cash ist Fesch" is a common saying in Austria and southern Germany. The words mean cash is beautiful. Since the virus outbreak, shops that have remained open, like grocery stores, have encouraged people to pay with cards. And Germany's central bank said 43 percent of Germans recently paid for goods and services with a card.

The Bank of Japan estimates that cash makes up for 53 percent of household assets. But the threat of the coronavirus could move the country toward going cashless, said Hiroki Maruyama, head of the nonprofit Fintech Association of Japan. He added, "The culture is slowly changing."

In Iran, there are no international bank cards, like Visa or Mastercard, because of U.S. sanctions. Yet new signs appeared at some gas stations in Tehran: "Service is only for those who will pay by debit cards." A debit card is a small plastic card that is used in place of cash to buy things.

However, cash use is still common in places like West and Central Africa where many cannot pay for the cost of banking services.

Dorothy Harpool teaches at Wichita State University's W. Frank Barton School of Business. Harpool thought some people would rethink their use of cash during the crisis. But she said the world would not be cashless "until everyone and every country has reliable access to the internet."

In Lebanon, as the economy worsened late last year, the central bank said people withdrew an estimated $3 billion and saved it at home.

"Corona is the last thing on people's minds right now," Ihsan, a money changer in Beirut said. "All they're thinking about is how to handle this crisis and get money to live."

He said there are some things you just cannot do without cash. "Like how else can you bribe a government employee to get your business done? With a credit card?"

Zeina Karam reported on this story for the Associated Press. John Russell adapted it for Learning English. Hai Do was the editor.

cash -- n. money in the form of coins and bills

source -- n. the cause of something (such as a problem) — usually + of

asset -- n. something that is owned by a person, company, etc. — usually plural

reliable -- adj. able to be trusted to do or provide what is needed : able to be relied on

handle – v. to touch, feel, hold, or move (something) with your hand

bribe -- v. to try to get someone to do something by giving or promising something valuable (such as money) : to give or offer a bribe to (someone)