Update Required To play the media you will need to either update your browser to a recent version or update your Flash plugin.
By Dan Novak
11 January 2023


California has been hit with a series of powerful storms that began late last month. The storms have brought the state an extreme amount of rainfall. More than 17 people have died from the storms and over half of California's 58 counties have been declared disaster areas, the governor said. There are even more storms expected in the coming days.

California has also experienced a multi-year drought. The extreme dry period has severely cut water supplies and forced officials to urge residents to save water.

Experts say the series of storms will help drought conditions, but it is not yet clear exactly how much. 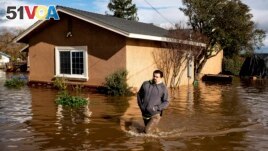 However, the rain and snow will not be enough to fix some of California's long-term water problems that climate change is making worse.

Here is a look at how the storms will affect California's long struggle with drought:

Where is the rain helping?

California has experienced six so-called atmospheric rivers in recent weeks. Atmospheric rivers are narrow areas in the atmosphere with a lot of moisture. Three more are expected, with the storms set to continue for at least another week, Governor Gavin Newsom said Tuesday.

The rain has come especially hard in central California, including the San Francisco Bay Area and Sacramento Valley. Rainfall is 138 percent higher than the average for this time of year, officials said. The storms have also brought snow to the Sierra Nevada Mountains along California's eastern border.

Most of the state's reservoirs remain below average for this time of year. But some have begun to fill, especially those close to the hard-hit Sacramento area and along parts of the Sierra Nevada. The reservoirs are important for supplying water to the Central Valley. That is an area of farmland that grows large amounts of fruits, nuts and grains. The reservoirs also supply water to millions of people living in coastal cities.

"What we've got so far puts us in good shape, probably for at least the next year," said Alan Haynes. He is a water expert with the California Nevada River Forecast Center.

Snowpack is its own type of reservoir. Snow saves moisture that hopefully melts slowly into reservoirs, supplying people with water during summer and fall. But now that snowpack often melts too quickly and reservoirs are not able to capture enough of it.

Where could the storms fall short?

It is still early in the winter and it is unclear what the next few months will bring. Last year, statewide snowpack around this time also looked hopeful. But a few warm, dry months followed. When snowpack was supposed to peak in early April, it was just 38 percent of the historic average.

Also, the storms have not dropped as much water on northern California. A reservoir at Lake Shasta that was at 55 percent of its historical average on December 25 had risen to 67 percent by January 9. It is better, but still well below historical averages, Haynes said.

The atmospheric rivers are not hitting everywhere. David Gochis is an expert in how water affects the weather at the National Center for Atmospheric Research. For some of the biggest reservoirs, it may take five or six large rainfall events to fill them, he said.

Many farmers in California pump water from underground. Some wells are running dry. It is something that is not going to be solved by a short-term series of storms, experts said.

And while there have been some wet years mixed in, California's drought has been going on for about 20 years. Climate change is creating drier, hotter conditions. Water evaporates faster. California officials predict there will be less water in the state's future.

Jeannie Jones is with the California Department of Water Resources. She said, "Big picture, this series of storms really is kind of just a drop in the bucket."

drought — n. a long period of time during which there is very little or no rain

reservoir — n. a usually artificial lake that is used to store a large supply of water for use in people's homes, in businesses, etc.

well — n. a deep hole made in the ground through which water can be removed

evaporate — v. to change from a liquid into a gas