Update Required To play the media you will need to either update your browser to a recent version or update your Flash plugin.
By Dan Friedell
19 February 2022


A former leader of Temple University's business school was found guilty in late 2021 for sending false data to lift the school's rankings.

Moshe Porat was head of Temple's Fox School of Business and Management from 1996 until 2018. He worked with some employees to provide false information to U.S. News and World Report, a publication known for its rankings of American colleges.

The false information included the number of students who sent test scores, their school grades, and work experience. Based on the information, U.S. News gave the university's computer-based business degree program, known as an online MBA, the top ranking for four years ending in 2018. The publication also moved up Temple's part-time MBA program to seventh place in 2017. 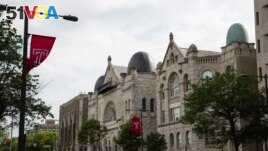 The leader of Temple University's business school was found guilty of reporting false data to increase his school's rankings in an important publication.

U.S. Government lawyers said Porat boasted about these rankings to bring in more students and donations to the school. The number of students, they said, grew greatly in a few short years and rising rankings brought in millions of dollars.

On November 29, Porat was found guilty of charges related to sending false information "to defraud the rankings system, potential students, and donors."

After news about the false information came out, the number of students in Temple's online MBA program dropped to just over 100. NBC News reported that the program had more than 330 students in 2017.

U.S. News and World Report also took Temple's online business program out of its rankings for a short time. It is now ranked 105th.

Ibrahim Fetahi was a student in Temple's online MBA program. He said he chose the program because of its high ranking. He said he felt as if he paid for a costly meal, but instead got something more like fast food. Fetahi added, "I will always have a scar on my resume."

During the trial, The Philadelphia Inquirer reported that one of Porat's lawyers argued Temple University itself was the real guilty party in the case. He said the school was occupied with rankings and even trained their employees on how to get higher rankings.

In its coverage of the Temple case, the publication Inside Higher Ed listed several well-known universities that have admitted to providing false information. The schools are Villanova University's law school, Tulane University's business school, Claremont McKenna College, and Bucknell University.

The Temple case is different, however. Porat is believed to be the first university official who has been charged and found guilty of providing false information in college rankings.

Robert Morse oversees data for U.S. News and World Report. He said the publication counts on schools to send correct data. He told VOA that schools will be removed from the rankings if they send information that results in an "inflated rank."

"U.S. News takes cases of misreporting seriously. Our mission is to provide students with accurate, in-depth data to help them in their school search."

What to make of college rankings?

There are two important questions about rankings that come from the Temple case: Can students trust rankings? And how much weight should students give rankings when choosing a college?

Francie Diep writes about college rankings for The Chronicle of Higher Education. She said students should use rankings as only part of their college decision.

"There's also just a lot of things that are important to students that the U.S. News rankings don't measure. So, if the only thing you're looking at is the rankings, then you may not be, sort of, making the best choice for you depending on what things you want from college."

Ahead of rankings, Diep says students may want to consider the cost of attendance, a sense of belonging at the school, and how much money they could earn after school. "That's one of the most important things for most families and that's not really captured in the rankings," she said.

Katie Burns is a college adviser for IvyWise. She works with both American and international students to help them pick the best college.

Burns said international students often want to choose a university people back home will know about, but American students are open to considering schools that are the best fit.

"The ranking systems are one tool, but they are not the end-all, be-all of your success. You need to have your own benchmark and system for evaluating what's a good fit for you."

Dan Friedell wrote this story for Learning English with additional reporting from The Associated Press.

How important do you think college rankings should be to students? Tell us about it in the Comments Section and visit 51VOA.COM.

ranking – n. the position of something on a list

boast – v. to express too much pride in yourself or something you have

defraud – v. to trick or cheat someone or something in order to get money

party – n. a person who is involved in a legal case or contract

scar – n. a feeling of pain or sadness caused by a bad experience; a mark left on something where it has been damaged

resume – n. a document describing your education and work history

inflated – adj. increased to a level that is not proper or too large

benchmark – n. something that can be used to judge the quality or level of other, similar things