Update Required To play the media you will need to either update your browser to a recent version or update your Flash plugin.
By Dan Novak
07 January 2022


Observers say the trial of former Theranos chief Elizabeth Holmes raises concerns about the way the technology industry pushes its products and services.

The closely watched trial has brought a lot of attention to the area in California known as Silicon Valley, a technology industry center, and its methods.

Holmes was found guilty on Monday of four of 11 charges of fraud. She had been accused of tricking investors into believing that Theranos had developed a revolutionary new medical device. The device, company officials said, was able to find many kinds of diseases from a small amount of blood taken from a person's finger. 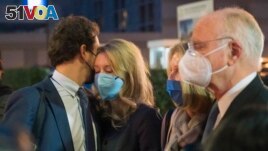 Elizabeth Holmes is consoled by her partner, Billy Evans, after leaving federal court after the verdict in San Jose, Calif., Monday, Jan. 3, 2022. Holmes was convicted of fraud in the Theranos case. (AP Photo/Nic Coury)

Now, Holmes could serve 20 years in prison for each charge. Legal experts say she is unlikely to serve that long, however.

Holmes' trial result "will send a message to CEOs that there are consequences in overstepping the bounds," said Ellen Kreitzberg. She is a law professor at Santa Clara University. However, she said, "Investors are still going to want to make more money on a promising idea."

Federal lawyers said during the trial that Holmes was a fraud only concerned with fame and money. Holmes' defense lawyers said she was a very gifted woman operating in an industry controlled by men, who was emotionally and sexually abused by her former lover and business partner, Sunny Balwani.

The trial showed the weaknesses of the business method used by some successful Silicon Valley companies known as "fake it ‘til you make it." That idea helped start companies like Google, Netflix, Facebook and Apple.

During that time, Holmes went from an unknown person to a Silicon Valley star who was valued at $4.5 billion. The story of her fall has been told in documentary movies, books, podcasts and will soon be a TV series.

Holmes set out to create an easier, less painful and less costly way to look for hundreds of diseases and health problems. Her product took a few drops of blood from a person's finger unlike traditional blood tests. She aimed to change an industry controlled by testing companies like Quest Diagnostics and Labcorp.

Holmes proposed starting with small labs in Walgreens drug stores and Safeway food stores across the U.S. The labs would use a small Theranos device called the Edison to run fast, easy blood tests.

The idea — and the way Holmes presented it — excited investors hoping to make money on a new company. Holmes helped Theranos raise more than $900 million from investors like businessman Rupert Murdoch and the Walton family which owns Walmart.

What most people did not know at the time was that Theranos' blood-testing technology produced incorrect results.

Theranos then secretly sent patients' blood to traditional laboratories using traditional machines. Evidence shown at the trial also showed that Holmes lied about supposed deals that Theranos had reached with the U.S. military and drug companies like Pfizer.

The company collapsed after an investigation and reporting from The Wall Street Journal newspaper found dangerous problems in the company's technology.

During her trial, Holmes sometimes expressed sadness about the way she had done things. But she said that she had forgotten about some of the important events brought up by government lawyers. She said she never stopped believing that Theranos was going to improve its technology.

She blamed Balwani, who she secretly lived with while he was Theranos' chief operating officer from 2009 to 2016.

Holmes said that Balwani failed to deal with the laboratory problems that he had promised to fix. She also accused him of abusing her while controlling what she ate, when she slept and who her friends were. In addition, Holmes said she had been raped by an unidentified person while still studying at Stanford University before starting Theranos.

fraud— n. the crime of using dishonest methods to take something valuable from another person

consequence — n. (often pl.) something that happens as a result of a particular action or set of conditions

bounds — n. the area in which a game (or a rules-based activity) is played