Update Required To play the media you will need to either update your browser to a recent version or update your Flash plugin.
By VOA
26 February 2021


We present the second of four parts of the short story "William Wilson," by Edgar Allan Poe. The story was originally adapted and recorded by the U.S. Department of State.

In the first part of my story I spoke about my life at my first school, and about the other boys — over whom I gained firm control. But there was one boy who would not follow my commands, who would not do what I told him to, as the other boys did. His name was the same as mine — William Wilson — although he did not belong to my family in any way. He seemed to feel some love for me, and had entered the school the same day as I had. Many of the boys thought we were brothers. I soon discovered that we had been born on the same day: January nineteenth, eighteen hundred and nine. 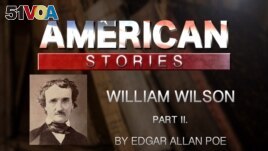 Wilson continued his attempts to command me, while I continued my attempts to rule him. The strange thing is that, although I did not like him, I could not hate him. We had a battle nearly every day, it is true. In public it would seem that I had been proved the stronger; but he seemed somehow able to make me feel that this was not true, and that he himself was stronger. Nevertheless, we continued to talk to each other in a more or less friendly way. On a number of subjects we agreed very well. I sometimes thought that if we had met at another time and place we might have become friends.

It is not easy to explain my real feelings toward him. There was no love, and there was no fear. Yet I saw something to honor in him, and I wanted to learn more about him. Anyone experienced in human nature will not need to be told that Wilson and I were always together.

This strange appearance of friendship — although we were not friends — caused, no doubt, the strangeness of the battle between us. I tried to make the others laugh at him; I tried to give him pain while seeming to play a lighthearted game. My attempts were not always successful, even though my plans were well made. There was much about his character that simply could not be laughed at.

I could find, indeed, but one weakness. Perhaps he had been born with it, or perhaps it had come from some illness. No one but me would have made any use of it against him. He was able to speak only in a very, very soft, low voice. This weakness I never failed to use in any way that was in my power.

Wilson could fight back, and he did. There was one way he had of troubling me beyond measure. I had never liked my name. Too many other people had the same name; I would rather have had a name that was not so often heard. The words sickened me. When, on the day I arrived at the school, a second William Wilson came also, I felt angry with him for having the name. I knew I would have to hear the name each day a double number of times. The other William Wilson would always be near. The other boys often thought that my actions and my belongings were his, and his were mine.

My anger grew stronger with every happening that showed that William Wilson and I were alike, in body or in mind. I had not then discovered the surprising fact that we were of the same age; but I saw that we were of the same height, and I saw that in form and in face we were also much the same. Nothing could trouble me more deeply (although I carefully tried to keep everyone from seeing it) than to hear anyone say anything about the likeness between us of mind, or of body, or of anything else. But, in truth, I had no reason to believe that this likeness was ever noticed by our schoolfellows. He saw it, and as clearly as I; that, I knew well. He discovered that in this likeness he could always find a way of troubling me. This proved the more than usual sharpness of his mind.

His method, which was to increase the likeness between us, lay both in words and in actions; and he followed his plan very well indeed. It was easy enough to have clothes like mine. He easily learned to walk and move as I did. His voice, of course, could not be as loud as mine, but he made his manner of speaking the same.

How greatly this most careful picture of myself troubled me, I will not now attempt to tell. It seemed that I was the only one who noticed it. I was the only one who saw Wilson's strange and knowing smiles. Pleased with having produced in my heart the desired result, he seemed to laugh within himself and cared nothing that no one laughed with him.

I have already spoken of how he seemed to think he was better and wiser than I. He would try to guide me; he would often try to stop me from doing things I had planned. He would tell me what I should and should not do; and he would do this not openly, but in a word or two in which I had to look for the meaning. As I grew older I wanted less and less to listen to him.

As it was, I could not be happy under his eyes, that always watched me. Every day I showed more and more openly that I did not want to listen to anything he told me. I have said that, in the first years when we were in school together, my feelings might easily have been turned into friendship; but in the later months, although he talked to me less often then, I almost hated him.

Yet, let me be fair to him. I can remember no time when what he told me was not wiser than would be expected from one of his years. His sense of what was good or bad was sharper than my own. I might, today, be a better and happier man if I had more often done what he said.

It was about the same period, if I remember rightly, that by chance he acted more openly than usual and I discovered in his manner something that deeply interested me. Somehow he brought to mind pictures of my earliest years — I remembered, it seemed, things I could not have remembered. These pictures were wild, half-lighted, and not clear, but I felt that very long ago I must have known this person standing before me. This idea, however, passed as quickly as it had come.

It was on this same day that I had my last meeting at the school with this other, strange William Wilson. That night, when everyone was sleeping, I got out of bed, and with a light in my hand, I went quietly through the house to Wilson's room. I had long been thinking of another of those plans to hurt him, with which I had until then had little success. It was my purpose now to begin to act according to this new plan.

Having reached his room, I entered without a sound, leaving the light outside. I advanced a step, and listened. He was asleep. I turned, took the light, and again went to the bed. I looked down upon his face.

The coldness of ice filled my whole body. My knees trembled, my whole spirit was filled with horror. I moved the light nearer to his face. Was this — this the face of William Wilson? I saw indeed that it was, but I trembled as if with sickness as I imagined that it was not. What was there in his face to trouble me so? I looked, and my mind seemed to turn in circles in the rush of my thoughts. It was not like this — surely not like this — that he appeared in the daytime. The same name, the same body; the same day that we came to school! And then there was his use of my way of walking, my manner of speaking! Was it, in truth, humanly possible that what I now saw was the result — and the result only — of his continued efforts to be like me? Filled with wonder and fear, cold and trembling, I put out the light. In the quiet darkness I went from his room and, without waiting one minute, I left that old school and never entered it again.

Now it's your turn to use the words in this story. What are some of the problems you had with other young people when you were younger? How did you solve those problems? Let us know in the comments section or on 51VOA.COM.

lighthearted - adj. having or showing a cheerful and happy nature

perhaps - adv. possibly but not certainly

height - n. a measurement of how tall a person or thing is

likeness - n. the quality or state of being alike or similar especially in appearance

schoolfellow(s) n. - a more formal word for schoolmate or classmate

tremble(d) - v. to shake slightly because you are afraid, nervous or excited