Willis Conover, the Voice of Jazz, Is Now Online

Update Required To play the media you will need to either update your browser to a recent version or update your Flash plugin.
By VOA
13 September, 2015

"Jazz does not belong to one race or culture, but is a gift that America has given the world."

The late Willis Conover -- an internationally-known jazz producer and broadcaster -- delivered that gift of jazz music from the studios at the Voice of America for more than 40 years. People still write to VOA fondly about Conover, who died in 1996.

Imagine tuning the dial of a shortwave radio through static that crackled and popped. Finally, the dial finds the musical notes of "The A Train," a popular song written by the great Duke Ellington. Next comes Conover's voice saying ... 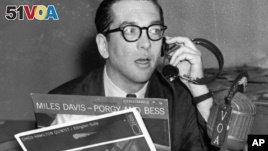 Willis Conover, an expert on jazz, broadcasts from his Voice of America studio in Washington in March 1959. (AP Photo)

For more than 40 years, Willis Conover's long-running "Jazz Hour" introduced millions of people in Europe and the former Soviet Union to American jazz.

He produced jazz concerts at the White House, the Newport Jazz Festival, and for movies and television. He was the voice of jazz around the world. ...

But, at home in America, few people knew him or his work.

Maristella Feustle is the Music Special Collections Librarian at the University of North Texas, UNT. She says a big chapter in jazz history is now being told.

"It's a gigantic untold chapter in jazz history because all of these interviews have been hidden so long. Willis's role overseas in propagating jazz and its effect and presenting the best of America in actions rather than words. All of these things are untold, hidden history stateside because the VOA wasn't able to broadcast stateside.

"So I see a treasure trove of research, of history, of connections, because Willis had so many connections with so many jazz musicians around the world and that's finally going to be unhidden." 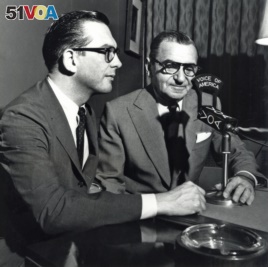 Willis Conover in the studio with Irving Berlin

Now, under the music program at UNT, the Willis Conover archive of jazz recordings are being made available online.

Maristella Feustle says they received the music collection as a gift from the the Willis Conover Jazz Preservation Foundation in 1997.

She says the collection came with thousands of music recordings, interviews, program notes and other personal items.

"Because it came with thousands of sound recordings, we've cataloged and added almost 20,000 CDs alone, just from Conover's collection. The process collection, which includes his collection of reel-to-reels tapes that being just under twenty-one hundred reel-to-reel tapes spanning the early 1950s through 1996. Personal papers, writings, and correspondences you name it."

After applying to several grants to help with the preservation of the collection, UNT was awarded funding by the Grammy foundation.

"We found out from the Grammy foundation in March that we had indeed gotten the grant and sent up the first batch this summer of Conover reels. So these 10 tapes are that first shot, and it went beautifully. We were thrilled the moment we were able to hear the tapes."

Maristella adds that when using the online archive, listeners and users will grasp the significance of Willis Conover in waves.

"First, is just the idea that yes, this guy is important. And then actually going though and seeing the interviews he's done and going through his correspondence, the playlist for his broadcasts, that's when it starts to really hit you."

There are 10 digital jazz recordings online. There's Willis Conover featuring Bill Evans at the Village Vanguard, an interview with American jazz pianist Art Tatum, and a live performance of the "Orchestra of Washington, D.C." to name a few. Many other handwritten program notes also have been added.

The online archive are free and open to the public. So far, it is being well-received, Feustle said. There is a following on social media, too, like Facebook and Twitter. Again, Maristella Feustle,

"It's been received very enthusiastically. I'm one of the administrators of the Willis Conover Facebook page, and we have just over 700 ‘Likes' and Willis still has a tremendous following not only overseas but with shortwave listeners in the (U.S.) States and people are elated. We have gotten a great response on Twitter, and one of the emails I got following the posting of this collection was a very short, but sweet email. It was from somewhere overseas...

‘respected librarian thank you for providing the link to access my favorite music'.

In honor of his memory, a petition has been sent to persuade the Postal Services Stamp Advisory Committee to put Willis Conover on a U.S. postage stamp. The campaign received over 7,000 signatures. If it's approved, it will send the face of the voice -- who brought jazz to many listeners during the Cold War -- around the world again.

Marsha James wrote the story for Learning English. Kathleen Struck was the editor.

Credit to the University of North Texas Music Library for use of Willis Conover recordings.

fondly - adv. in a loving way

batch -n. an amount of something that is made at one time

playlist - n. a list of songs to be played by a radio station

petition - n. a written document that people sign to show that they want a person or organization to do or change something