Update Required To play the media you will need to either update your browser to a recent version or update your Flash plugin.
By John Russell
26 March 2021

It is a $6,000 bottle of Petrus Pomerol wine that spent a year on the International Space Station.

Researchers in Bordeaux are examining the twelve bottles of wine as well as 320 pieces of grapevines that returned to Earth in January. They say the wine and grapevines are part of a longer-term effort to make plants on Earth better resist climate change and disease.

Alcohol and glass are not usually permitted on the International Space Station. Each bottle was packed inside a special steel container during the journey.

At a special tasting this month, 12 wine experts tried one of the space-traveled wines at the Institute for Wine and Vine Research in Bordeaux.

They tasted and smelled the wine alongside a similar bottle from the same year that had stayed on Earth. The tasting was blind, meaning the experts did not know which wine they were drinking. 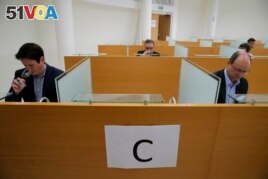 Nicolas Gaume is the head of Space Cargo Unlimited, the company that arranged the experiment. He said the experiment studied the effects of the lack of gravity on the wine and vines.

"I have tears in my eyes," Gaume told The Associated Press about the experiment.

Jane Anson is a wine expert and writer. She said the wine that remained on Earth tasted "a little younger than the one that had been to space."

Chemical and biological study of the wine's aging process could help scientists find a way to age fine vintages - the grapes or wine produced during one season. That information came from Dr. Michael Lebert of Germany's Friedrich-Alexander-University. Lebert was an advisor on the project.

The small pieces of vine, which are known as canes in the grape-growing business, not only survived the journey but also grew faster than vines on Earth. They were unaffected by limited light and water.

Once researchers understand why this happened, Lebert said that could help scientists develop stronger, healthier vines on Earth. Such information could also help create a way to grow grapes or to make wine in space.

Christophe Chateau of the Bordeaux Wine-Makers' Council welcomed the research as "a good thing for the industry." But Chateau expects it would take a decade or more to lead to practical, or actual, uses.

Private investors helped finance the project, which the researchers hope to continue on future space missions. The cost was not made public.

Researchers said each of the wine experts had many opinions about the difference between the earth wine and the space wine.

Franck Dubourdieu is a Bordeaux-based expert in the study of wine and wine-making.

"For me, the difference between the space and earth wine ... it wasn't easy to define," Dubourdieu said.

Anson said, "The one that had remained on Earth, for me, was still a bit more closed ... a bit younger." But, she added about the two wines, "They were both beautiful."

Masha MacPherson and Angela Charlton reported on this story for the Associated Press. John Russell adapted it for Learning English. Hai Do was the editor.

grapevine – n. a climbing plant on which grapes grow

lack – n. the state or condition of not having any or enough of something

define -- v. to show or describe (someone or something) clearly and completely