Update Required To play the media you will need to either update your browser to a recent version or update your Flash plugin.
By Bruce Alpert
28 April, 2017


No president has had a first 100 days like Donald Trump.

He won confirmation of a new Supreme Court nominee and ordered the bombing of a Syrian air base. He moved to cancel policies by former President Barack Obama and promised to stop North Korea's expanding nuclear program.

But he received almost as much attention for his tweets. He often uses Twitter to criticize the news media and his political opponents, sometimes unfairly, according to fact checkers.

But Trump also uses Twitter to explain what his administration is doing. On Thursday morning, he explained why he decided not to withdraw from the North American Free Trade Agreement, hours after aides said he was considering doing so. The tweet read: "I received calls from the President of Mexico and the Prime Minister of Canada asking to renegotiate NAFTA rather than terminate. I agreed..."

Mark Peterson is chair of the Department of Public Policy at the University of California at Los Angeles (UCLA).

He said, "As a general proposition, there hasn't been a first 100 days like what we have experienced with President Trump."

Joshua Stockley, a political science professor at the University of Louisiana at Monroe, said the start of the Trump presidency has been frantic. By frantic, he means wild and hurried activity.

Among the most frantic were the five days leading to Saturday, the 100th day of his presidency.

On Wednesday, Trump offered a new proposal for what an aide said is "one of the biggest tax cuts in American history."

That same day he invited the entire United States Senate to a briefing on North Korea. Senators were told Trump plans to pressure North Korea to pull back on its nuclear weapons program and that war is a last resort.

Trump also continued to issue executive orders. By Saturday, the White House said the total should reach 30, the largest number in a president's first 100 days since President Franklin Roosevelt in 1933.

But three executive orders related to immigration have been blocked by federal judges. Two were orders to temporarily block travel from some Muslim majority nations. Another would cut federal funding to local governments that fail to enforce immigration laws.

The court decisions were not Trump's only setbacks.

During the campaign, Trump, a Republican, promised to repeal and replace Obama's health care bill, known as Obamacare.

But a congressional vote on a repeal bill was cancelled because there were not enough votes to pass it. A newly negotiated health care plan could get a vote soon, but approval remains uncertain.

Adding to Trump's problems are FBI and congressional investigations into whether members of Trump's presidential campaign worked with Russia to influence the 2016 election.

Sean Spicer is Trump's chief spokesman. He said that Trump has been carrying out his promises, particularly on reducing illegal immigration.

"I think we feel very proud of what we've been able to accomplish and fulfill the promises that he's made to the American people," Spicer said.

That was the case with four Trump tweets on March 4 that charged Obama with wiretapping his phones at Trump Tower during the election.

One of them said, "How low has President Obama gone to tapp my phones during the very sacred election process. This is Nixon/Watergate. Bad (or sick) guy!"

Members of Congress and the U.S. FBI director said Obama did not wiretap Trump.

A Washington Post/ABC News poll this week found that only two percent of people who voted for Trump regret doing so.

But with Democrats and many independents expressing negative views, Trump's approval rate averages 42 percent, according to Real Clear Politics. That compares to an average approval rate of 69 percent for the last 12 presidents nearing 100 days into their presidencies.

Peterson, the UCLA political expert, said the good news for Trump is that people who voted for him still support him. Many who voted against Trump are over their shock of his surprise victory, but remain fearful of what Trump will do as president, he said.

Susan Roberts is a political science professor at Davidson College in North Carolina. She said many cannot get used to Trump after eight years of President Obama. Obama was often described as "no drama Obama." By "no drama," people meant that Obama generally appeared calm.

Tony Perkins is president of the Family Research Council, a Christian conservative group.

Perkins said a major reason Trump voters continue to back him is his choice of conservative judge Neil Gorsuch for the Supreme Court.

"This is why so many people went out to vote for Donald Trump, getting a conservative Supreme Court justice and hopefully more," Perkins said. 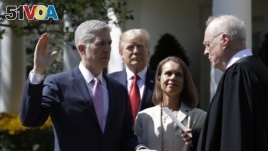 On Comedy Central this week, "Daily Show" host Trevor Noah discussed the first three+ months of the Trump presidency. "It's 100 days in Trump time. For us, it's 15 years," Noah said.

In an interview this week with Reuters, Trump said his first 100 days as president were difficult.

Bruce Alpert reported on this story for VOA Learning English based on reports by VOA News, the Associated Press, Reuters and other sources. Hai Do was the editor.

terminate - v. to end something

proposition - n. a plan or proposal presented to a person or group of people to consider

last resort - n. an action taken only when everything else has been tried and failed

repeal - v. to officially make a law or regulation no longer valid

accomplish - v. to get something done

previous - adj. existing or happening before the present time