Update Required To play the media you will need to either update your browser to a recent version or update your Flash plugin.
By Susan Shand
05 February, 2018


Safe from the violence in Syria, Hussein Hassan now fears his children face another threat – the icy water that floods their shelter in Lebanon.

Hassan and his 11-member family fled conflict near their village near Deir ez-Zour two months ago. They are now among the refugees who have to deal with Lebanon's winter weather in tents.

"We are afraid of the cold weather and afraid our children will get sick," he said. "Our lives are as nothing. We have nothing but fear. Fear from illness, from the rain, and there is nothing to keep warm with."

Of one million refugees registered in Lebanon, an estimated 250,000 Syrians live in tent camps across the country.

Many, like Hassan, live in the Bekka Valley, where winter temperatures sometimes drop below freezing.

A storm last week showed how helpless the refugees are when faced with freezing conditions. The amount of money available to help them is shrinking. 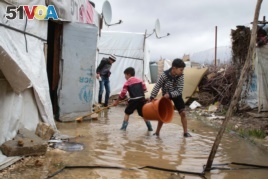 Hassan Fahd al Raja, holding a bucket, helps his siblings drain water out of their family's tent, which is part of a refugee camp in Lebanon's Bekaa valley. (Photo: John Owens for VOA)

Rains beat against the temporary home of Hassan and his family. Some of the rainwater passed through holes in the cloth, while other water landed outside, but then spread along the ground and into the tent.

"The wood broke and we were flooded. We had to go to our neighbors," said Hassan as he described the collapse of the tent's roof.

In front of him, some clothing and bedding were completely wet.

Following months of relatively mild weather, the storm showed just how cold winter can be in Lebanon's central valley.

Some Syrians are spending their seventh year in camps like this one.

Outside Hassan's home, children ran through muddy, flooded passages on a cold day.

Nearby, Zahra Hamad, mother of 10 children, wondered how much longer she could keep their tent warm. Her family sleeps in the only room that doesn't leak. They keep warm with a diesel-fueled heater in the center of the room.

The family has used the heater every winter for the past four years. It costs 7 dollars a day to operate – an amount she does not always have.

"Sometimes it is better outside than inside, things get so bad," Zahra Hamad said. "There used to be aid...but now there is no wood...nothing," she said. 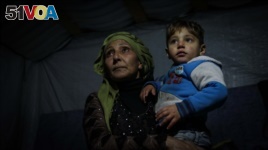 Mother of eight Najah Ali has been living in the camp for two years. Her husband died in Syria and she struggles to provide for her family - she cannot afford fuel for a heater. (John Owens for VOA)

The non-governmental organizations and agencies that help refugees are also facing problems. As the Syrian conflict continues, it is difficult for them to get the money they need.

The Lebanese government refuses to make the refugee camps official. It is afraid that letting Syrians become members of Lebanese society could change Lebanon's political and social balance. So these camps continue to be built without government oversight.

The United Nations refugee agency has received just $143 million of a requested $228 million for its winter program. UN spokesman Scott Craig says the agency faced very difficult problems because it had to choose who should get the aid and who would not.

It is not just in the camps that winter has affected the refugees. On January 19th, a group of 30 to 35 Syrians were trying to cross Lebanon's closely guarded border when a snow storm hit. Sixteen of the Syrians died.

In a room on the second floor of Bekka Hospital, Mishaan al Abed looks at the images on his phone. He saw a picture of his six-year old daughter, Hiba. She was wearing a white coat and looking up at the camera.

The next image showed several bodies lying in the snow after the storm. He found it on social media while waiting for information about his family as they tried to cross the border. Six members of his family including his wife, his mother and little Hiba were among the dead.

His other daughter, three-year-old Sarah, survived. She lay on a hospital bed, her face marked with frostbite scars.

Abed says he was frightened when he heard his family planned to try to cross the border, but "they had to do it," he said. He was already living in Lebanon at the time, and waiting for his family to arrive to start a new life.

"If we could move somewhere where there isn't any wars maybe she will forget," he said, "but she has lost her mother...God help them."

John Owens reported this story for VOA. Susan Shand adapted it for Learning English. George Grow was the editor.

tent – n. a temporary shelter that is made of strong cloth (such as canvas or nylon) and used outdoors

roof – n. a top or covering

oversight – n. supervision; the act or job of directing work that is being done