With Lack of Visitors, Bali Monkeys Raid Homes of Villagers

Update Required To play the media you will need to either update your browser to a recent version or update your Flash plugin.
By John Russell
11 September 2021


Hungry monkeys on the island of Bali, Indonesia are now raiding the homes of local villagers in their search for something tasty.

The creatures can no longer depend on visitors to provide their favorite foods, including bananas, peanuts, and other treats. The visitors have stopped coming because of the coronavirus crisis.

Villagers in Sangeh say the gray monkeys, known as long-tailed macaques, have been leaving their protected area that is about 500 meters away. The creatures position themselves on top of homes and wait for the right time to come down and get food. 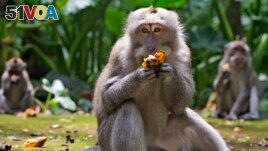 Villagers are concerned that the visits could turn into a large monkey invasion. So they have been taking fruit, peanuts and other food to the Sangeh Monkey Forest to try to keep the monkeys happy.

Villager Saskara Gustu Alit told The Associated Press, "We are afraid that the hungry monkeys will turn wild and vicious."

Vicious is a term that means very violent and cruel.

About 600 of the monkeys live in the protected forest area, swinging from the tall trees and moving around the area near the famous Pura Bukit Sari temple.

In normal times, the protected jungle area of the Indonesian island is popular with local people as well as international visitors. The relatively calm monkeys can be easily persuaded to sit with a person for a peanut or two.

Tourism is the main source of money for Bali's 4 million people. The island welcomed more than 5 million foreign visitors every year before the coronavirus crisis.

The Sangeh Monkey Forest usually had about 6,000 visitors a month. But as the pandemic spread last year and international travel decreased, that number dropped to about 500.

Since July, there have been no visitors. The government banned foreign travelers to the island and closed the monkeys' area to local residents as well.

Made Mohon is the operations manager for the protected area.

He said the restrictions have not only resulted in less food being brought to the monkeys, but also reduced the amount of admission money from visitors. The drop in admissions has made it difficult to buy enough food for the creatures.

Gifts from villagers have helped, but locals are also feeling the economic difficulties and are giving less and less, he added.

Made Mohon described the coronavirus crisis as being "beyond our expectations." He added, "Food for monkeys has become a problem."

The macaque can eat a number of animals and plants found in the jungle. But those in the Sangeh Monkey Forest have had so much contact with humans over the years that they are now used to other things.

"That's why I have urged villagers here to come to the forest to play with the monkeys and offer them food," he said. "I think they need to interact with humans as often as possible so that they do not go wild."

Firdia Lisnawati and Niniek Karmini reported on this story for Reuters. John Russell adapted it for Learning English. Bryan Lynn was the editor.

swing – v. to move backward and forward or from side to side while hanging from something

jungle – n. an area of land, usually in tropical countries, where trees and plants go close together