With More Girls Pregnant, Zimbabwe Pushes a Return to School

Update Required To play the media you will need to either update your browser to a recent version or update your Flash plugin.
By Dan Novak
13 January 2022


The number of pregnancies among girls and young women in Zimbabwe rose a lot during the pandemic. Zimbabwe has long struggled with youth pregnancies and child marriages because of weak enforcement of laws, poverty, and cultural and religious norms. COVID-19 has worsened the situation.

The country of 15 million people had a strict lockdown to stop the spread of the virus. Many girls were left alone and unable to get contraceptives or visit health clinics.

Virginia Mavhunga is a 13-year-old mother. She spends her days collecting water and selling fruits and vegetables. She also cooks, cleans, and washes clothes. She says she is too busy to give her 3-month-old son much support. 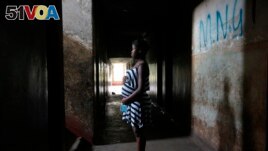 Virginia also helps prepare her family members for school and helps them with homework. It is these tasks that are hardest for Virginia, because at age 13 she would also rather be in school.

Virginia is part of a large increase in pregnancies among girls and young women reported in Zimbabwe and other southern African countries during the pandemic.

Before COVID-19, one of every three girls married before age 18, many with unplanned pregnancies. Many became victims of sexual abuse. Some looked to marriage and pregnancy as an escape from poverty, officials said. Before the pandemic, many such girls were considered a "lost cause," said Taungana Ndoro, a Zimbabwe education official.

Faced with the rising numbers, the government in August 2020 changed a law that banned pregnant students from attending school. Activists and officials said the move was good for the developing country. But so far, the new policy has largely failed. Most girls have not returned. Officials and families say poverty, cultural beliefs, and bullying are keeping the girls out of school.

Virginia tried to return to school. But she was bullied in her community. Many people were not used to seeing a pregnant girl in a school uniform.

She had hoped to marry the older man who was the father of her child. He refused. She and her family did not follow through with rape accusations. It is illegal to have sex with children under the age of 16 in Zimbabwe.

People convicted of having sex with anyone younger than 16 can pay a fine or spend up to 10 years in jail. Most incidents, however, never go that far. Families and officials have long tried to ignore the cases or force the girls to marry, said a police spokesman.

Africa has one of the highest pregnancy rates among youths worldwide, reports the United Nations. Zimbabwe and a few other countries now have policies to protect pregnant girls' education.

Few were interested. By November, her group had persuaded only one girl to return to school in Murehwa, a poor town of mostly small farms.

"They prefer to have the child married, even if she is under the age of 18," Chitongo said.

After Virginia gave birth, her father ignored pressure to make her leave home. Her mother wanted to protect her, and that included keeping her out of school and away from bullying.

Virginia says she will return to school someday. She wants to get into a university, get a degree, and build her parents a bigger home.

"They may laugh at me now, but I am dedicating all my spare time and weekends to reading and catching up," she said.

strict — adj. demanding that people obey rules or behave in a certain way

contraceptive — n. a drug or device such as birth control pills or a condom that is used to prevent a woman from becoming pregnant

lost cause — n. a person or thing that is certain to fail

dedicate — v. to use time, money, energy, attention, etc. for something

spare – adj. kept as something extra that can be used if it is needed