Update Required To play the media you will need to either update your browser to a recent version or update your Flash plugin.
By Gregory Stachel
01 July 2022

That is causing worries in world markets because the South American nation is the world's number six exporter of wheat. 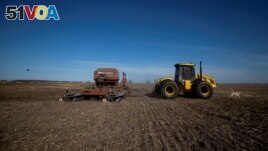 An agricultural worker operates farming equipment to plant wheat on farmland in Comodoro Py, outside of Buenos Aires, Argentina on June 21, 2022. (REUTERS/Matias Baglietto)

Argentina's production is even more important because of the worldwide wheat shortage. Russia's invasion of Ukraine has greatly increased wheat prices. The two countries are among the world's top wheat producers.

Juan Francisco Arregui is an Argentinian farmer. He told Reuters, "The season for wheat is complicated." His fields have not received rainfall in two months. He said the crop needs rain to arrive soon, but weather predictions are not promising.

While there was enough water to plant the seeds, "there is not much left," he said. He added, "It means that the wheat crop is not sure by any means. We can get it started, but then we are waiting for rain."

Argentina had a record wheat harvest of 22.4 million metric tons in the season that ended. Suppliers were hoping the country could replace the grain lost because of Russia's invasion of Ukraine.

But now, both of Argentina's main grains exchanges, Buenos Aires and Rosario, have cut wheat planting predictions. And they are warning of more cuts if the weather does not improve.

Cristian Russo is the head agronomist at the Rosario grains exchange. Its highest estimate of the next harvest is 18.5 million metric tons. Russo said, "Today anything that goes wrong with wheat is more important and means greater losses."

The exchange has warned about the worst wheat planting conditions in 12 years. It says planting of the grain is at 65 percent because of the dry conditions. Many fields could be left unplanted.

The Russia-Ukraine fighting has also greatly increased fertilizer prices. Russia is a major supplier. The loss of Russian fertilizer has hit farmers from the United States to South America.

Arregui said this season he paid $1,600 per metric ton for phosphate fertilizer. That is more than double the $700 he paid a year ago. Another fertilizer, called urea, doubled to $1,100 per metric ton. That pushed him away from planting wheat to planting soy, which requires a lower investment.

Concerns over government intervention also weigh on farmers' minds. Officials in Argentina are trying to control national inflation which is at about 60 percent. The government has kept a lower cap on wheat exports than last year. It has raised export taxes on the products soymeal and oil, and has threatened higher taxes for wheat. But Reuters news service reports that there is not enough support in congress for that step.

Arregui said, "Here you go to bed on a Sunday and on a Monday you don't know what news you're going to find." He was commenting on the changes in government policy.

He added, "Every day they are making decisions that indirectly affect what you do and it's a terrible uncertainty, you can't plan anything. It really costs you a lot every day."

complicated – adj. hard to understand, explain, or deal with

agronomy – n. a science that deals with the methods used by farmers to raise crops and care for the soil

cap – v. to put an upper limit on (something)

cycle – n. a repeating series of events or actions

uncertainty – n. something that is doubtful or unknown