Wives of Reuters Reporters Jailed in Myanmar Call for Their Release

Update Required To play the media you will need to either update your browser to a recent version or update your Flash plugin.
By Susan Shand
04 September, 2018


The wives of two news reporters jailed in Myanmar said on Tuesday the men were innocent and called for them to be released.

A court found the reporters guilty on Monday of violating the country's Official Secrets Act. They were sentenced to seven years in prison.

Their case is seen as a test of progress toward democracy in Myanmar, which was ruled by a group of military officers until 2011. The country is also called Burma.

Wa Lone, 32, and Kyaw Soe Oo, 28, work for the Reuters news agency. They were investigating the killing of villagers from the Rohingya Muslim minority by security forces when they were arrested in December 2017. The reporters told a court they were not guilty of the charges.

The wives and defense lawyers spoke at a press conference in Yangon on Tuesday. 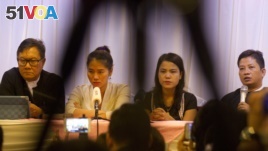 Kyaw Soe Oo's wife, Chit Su Win, said she had expected the court to clear the charges against the two men on Monday.

"I believed that we would be able to go home together," she said, adding that the men were doing their jobs and are innocent.

Wa Lone's wife, Pan Ei Mon, said she wanted the reporters to be released "as quickly as possible."

She said that she was sad that Myanmar's government leader, Aung San Suu Kyi, seemed to speak against the reporters before the ruling.

Aung San Suu Kyi told Japanese television station NHK in June that the two men were not arrested for their reporting, but because they violated "the Official Secrets Act."

Neither the Nobel Peace Prize winner nor her government's main spokesman have spoken about the case since the jail sentence was announced.

Many Myanmar news organizations and more than 20 civil society groups denounced the court's ruling. They said the conviction was an attack on the right to freedom of information.

The privately owned 7 Day Daily is one of Myanmar's most popular newspapers. Its front was all black with words that read "A sad day for Myanmar."

The newspaper said the sentences "end the hope that the current government will value and respect media freedom." It added that the government had earned a reputation for media suppression, as former military governments had done.

The paper said everyone needs to know "that democracy will not survive in an information dark age."

Myanmar barred media interference by the government in 2012. It was part of reforms by a quasi-civilian government that led to elections in 2015. Aung San Suu Kyi's party, The National League for Democracy, won the vote.

An editor of the Irrawaddy online news website said Aung San Suu Kyi and President Win Myint had to understand that the case was about the people's right to know.

The editor, Kyaw Zwa Moe, said, "These Reuters reporters were simply doing their jobs by attempting to gather information so as to uncover the truth."

The privately owned Myanmar Times showed a large picture of Kyaw Soe Oo, wearing handcuffs as he left the court. It said the conviction was a "blow to press freedom."

The state-run Global New Light of Myanmar newspaper reported the conviction. It did not criticize the decision, but said the defense could appeal.

The conviction comes as the United Nations said the killing of Rohingya in August 2017 was carried out by Myanmar's military. A U.N. report called for top generals to be tried. Myanmar rejected the report's findings.

U.N. agencies have said more than 700,000 Rohingya Muslims have fled into Bangladesh since August of last year.

The Reuters News Agency reported this story. Susan Shand adapted it for VOA Learning English. The editor was George Grow.

conviction –n.the act of proving that a person is guilty of a crime in a court of law

quasi- – combining form in some way or sense but not in a true, direct, or complete

editor – n. a person whose job is to edit something or oversee the language of something

handcuffs – n. a set of two metal rings that are joined together and placed around a person's wrists