Update Required To play the media you will need to either update your browser to a recent version or update your Flash plugin.
By Bryan Lynn
23 April 2022


A woman who lost one leg to cancer is seeking to break a world record by completing 102 marathon-length runs in 102 days. A marathon is a race that goes 42 kilometers.

Jacky Hunt-Broersma, who lives in the western American state of Arizona, set her goal in mid-January. And every day since then, she has been running the distance of a marathon.

Most of the time, she runs on roads and trails near her home in Gilbert, Arizona. Sometimes she completes her runs on a running machine called a treadmill. Hunt-Broersma averages just over five hours to complete the runs. 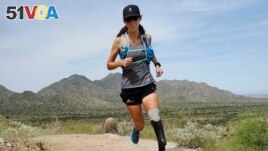 If she keeps successfully completing marathon-length runs every day, she will reach her goal by April 28. She would then hold the world record for completing 102 back-to-back marathon runs.

The current world record of 101 marathons was set April 10 by British runner Kate Jayden. The 35-year-old Jayden does not have a disability.

Hunt-Broersma, a native of South Africa, lost the bottom half of her left leg to a rare form of cancer in 2001. "The biggest struggle was accepting that part of my body was gone," she told The Associated Press.

Hunt-Broersma said that until five years ago, she was not very active. But then she looked into running and decided to give it a try. The sport ended up being quite costly. Currently, she runs on a prosthetic leg made out of a strong, light material known as carbon fiber. The carbon fiber blade she uses, which is designed specifically for running, costs about $10,000.

But Hunt-Broersma says her investment has been well worth it. "Running really changed my life," she said. "It helped me accept myself as an amputee. It gave me a sense of freedom. I fell in love with the process of pushing my body further just to see what I could do."

However, she has faced both physical and mental difficulties during her record-breaking attempt. On one recent day, Hunt-Broersma said she felt near collapse at 24 kilometers and began to cry. In that moment, she felt like her planned goal might not happen at all.

"I had a total emotional breakdown. I was like, ‘I just can't do this. What was I thinking?'" she said. "The trick for me is just to break it down into little goals, she added.

One of her recent runs was the world-famous Boston Marathon in Boston, Massachusetts. She finished that race, held April 18, with a time of 5 hours, 5 minutes.

Hunt-Broersma's main support team is her husband and their two young children. She is documenting her progress online and has also gained a large social media following.

As she nears the end of her goal, Hunt-Broersma is hoping to inspire a single thought in others, regardless of their own physical limitations. She tells people, "You're stronger than you think — and you're capable of so much more."

trail – n. a path through the countryside, often where people walk

prosthetic – n. an artificial body part, such as an arm, leg, or foot, that replaces a missing part

blade – n. a flat, sharp piece of metal that can be used as a tool or weapon

amputee – n. a person who has had an arm or leg cut off

capable – adj. able to do something