Women Are Better at Statistics than They Think

Update Required To play the media you will need to either update your browser to a recent version or update your Flash plugin.
By Dan Friedell
06 August 2022


Students seeking college degrees in sociology and psychology at the University of Nebraska at Omaha are required to take a class in mathematical statistics. Statistics is a kind of math that studies numbers that represent pieces of information.

Many of the students say they feel anxious about the statistics class. In other words, the class causes them worry and concern.

Two University of Nebraska professors sought to understand their students' anxieties, or fears. They hoped to be able to help educators improve their teaching of statistics and lessen students' worries. 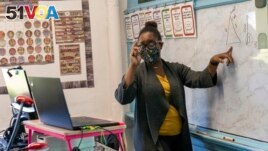 The two researchers explored several areas of the relationship between statistics anxiety and classroom results. They looked at how anxiety levels changed from the start of the class to the end. They also looked at how those levels related to exam results. And, they explored the role that gender plays in statistics anxiety and actual class results.

MacArthur and Santo found that, in general, female students were much more anxious about the class than males were.

Yet, based on their study, women did not need to be as worried as they were. The researchers found that the female students scored 10 percent higher than male students on the final exam. Males and females had scored more similarly on exams at the start of the term.

MacArthur and Santo studied 111 students who answered a series of questions at the beginning and end of the school term. They wanted to see how worried their students were about the class, and then follow their progress over a number of months.

At the start, the professors said, more men than women answered the questions confidently. But by the end, the number of women who were confident about their abilities increased. Their exam scores rose, too.

Frances Anderson is one of Santo's former students. She is working on an advanced degree in educational leadership. She remembers being fearful of statistics classes even though she had a history of doing well in math classes.

"After the first, I think it was one or two lectures, I felt completely incompetent. I felt like all of the other students knew what was going on, I didn't know anything."

Anderson said she thought she would fail the class. She even called some friends crying, saying "there's no way that I have the ability to do this."

After the concerns at the start, Anderson said she made friends with other students who offered help. She also spent one-on-one time with Santo going over the material and followed issues of interest so she could ask "deeper questions" that helped her understand the class better.

But the biggest reason she sought extra help? She did not want to be seen as an impostor -- someone who did not belong in the class.

"I think it's almost like ‘someone's going to catch you' and so you're trying to work to stay ahead of that. So it's sort of like well, I know if I just stay like one foot ahead, it won't be possible."

Anderson said her fear of being seen as not good enough made her work very hard.

MacArthur and Santo wrote about their study in the Journal of Statistics and Data Science Education. They noted that problems with statistics classes can "present a barrier to graduation."

Santo said the level of concern about statistics has always surprised him. He said he often tries to let his students know that math in statistics classes is more "practical," or useful in everyday life. But he said it is important for students to accept that they are dealing with math questions that do not have clear answers. That is different from other kinds of math problems.

Santo said students are used to doing work that results in a "right" answer. But in a statistics class for psychology or sociology, they should accept the idea that research data does not always produce clear results.

"For these students, if they're stressed out to the point that they're avoiding it or avoiding talking to their teachers, or avoiding asking for help, that's going to have a long-term impact on their grades."

Anderson said sometimes students set up roadblocks for themselves. In this case, she said, the students create a barrier to success by thinking they are not good at math.

Anderson offered suggestions for people to get past those roadblocks:

Ask questions and find other people who are facing similar roadblocks.

"The only unsuccessful students I've ever seen are those that don't ask questions," Anderson said.

Dan Friedell wrote this story for VOA Learning English based on his interviews with Santo and Anderson and a story in The Conversation.

degree –n. a certificate showing the completion of school

score–n. a way to keep track of points or goals or how someone does on an exam, in school often the number of points out of 100

confidently–adv. describing someone who does something without worry or concern

advanced–adj. something that is at a higher level than something else

lecture–n. a talk or presentation by a professor or teacher

incompetent –adj. used to describe a person who is not good at something

impostor –n. a person pretending to be someone else

barrier –n. something that blocks movement from one place to another

stress –n. a state of mental tension and worry

impact –n. an influence or effect