Update Required To play the media you will need to either update your browser to a recent version or update your Flash plugin.
By Bruce Alpert
29 March, 2016


Women are more religious than men.

That is the finding of a new report by the Pew Research Center.

Worldwide, 83 percent of women say they identify with a religion, compared to 79 percent of men, according to Pew. 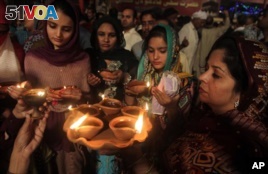 David Voas is head of the Department of Social Science at University College London, United Kingdom. He said prayer is often done in private, making it a good measure of how important religion is to people.

"The frequency of prayer may be the purest sign of religious commitment, which means that, arguably, it's the best yardstick to use in comparing men and women,'' he told Pew.

Pew completed its study of religious differences between men and women by exploring research in 84 nations. The research was done between 2008 and 2015.

And in some religions, such as for Roman Catholics and Orthodox Jews, only men are allowed to hold clergy positions.

Among Christians, women attend services more often than men. But that is not the case with Muslims and Orthodox Jews, Pew said. Among those religions, men are more likely to attend services.

Pew said this is because Muslims and Orthodox Jews give more weight to men's participation in worship services. Some Muslim mosques and Orthodox synagogues separate men and women. In some cases, women are limited to the back or a balcony area.

There is general acceptance by both women and men about some religious beliefs.

Voas of University College in London said researchers disagree on whether women who work outside the home are less religious. If it is true, he offers two possible reasons.

"Maybe paid employment crowds out time for religious involvement, or perhaps being exposed to different values and world views tends to undermine religious commitment," he said.

Not only do women tend to be more religious than men, but Pew found men are also more likely to be atheists. An atheist does not believe God exists.

In Uruguay, the United States, Germany and Spain, more than 60 percent of people who describe themselves as atheists are men, Pew said.

An exception is France. A slightly higher percentage of people who say they are atheists are women – 51 percent vs. 49 percent.

We want to hear from you. How do you feel about belief and religion? Men and women and religion? Write to us in the Comments section or share your views on 51voa.com.

gender gap – n. differences in views between men and women

yardstick – n. measurement of something

prioritize – v. to organize things so that the most important thing is done or dealt with first

heaven – n. the place where God lives and where good people go after they die according to some religions

hell – n. the place where the devil lives and where evil people go after they die according to some religions

involvement – n. having a connection to something or someone

exposed – v. to be informed of something

undermine – v. to make someone or something weaker or less effective usually in a secret or gradual way