Women of Afghan Robotics Team to Get Support from Qatar

Update Required To play the media you will need to either update your browser to a recent version or update your Flash plugin.
By Jill Robbins
12 September 2021


Qatar has given scholarships to members of a female robotics team from Afghanistan, the nation's education and science organization said on Tuesday. The team has been called the "Afghan Dreamers" and includes young scientists from ages 14 to 17.

Qatar has been helping with the efforts to take Afghans and foreigners who face risks in Afghanistan out of the country from Kabul airport. Those people include members of the robotics team. They are staying in housing at Doha's Education City area of schools and universities.

The team of high school students has about 20 members, mostly in their teenage years. They are now living in several places with some in Qatar and some in Mexico. 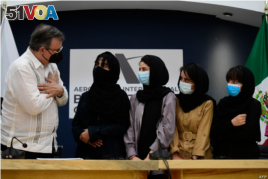 The Mexican Secretary of Foreign Affairs Marcelo Ebrard (L) welcomes four Afghan women, members of the Afghanistan Robotic team, during their arrival to Mexico after asking for refuge, at the Airport in Mexico City, on August 24, 2021.

The young women were in the news in 2017 because they could not get travel documents to take part in a robotics competition in Washington D.C. They were permitted to travel when then-President Donald Trump urged the State Department to make it possible.

Last year, they worked to build a low-cost medical ventilator from car parts. A ventilator is a machine that helps very sick people breathe.

Sheikha Hind bint Hamad Al-Thani is vice-chairwoman and chief executive of the Qatar Foundation. She said, "These talented, creative students have been living through a time of uncertainty and upheaval, and at Qatar Foundation we want to do whatever we can. By providing them with scholarships to study at Education City, their education can now continue uninterrupted."

She added that the foundation was learning about the young scientists' needs to decide on the right schools or pre-university programs for them.

The Taliban's seizure of power has caused some people to flee the country. Many Afghans fear a return to the severe Islamic law the Taliban enforced during the group's rule from 1996 to 2001.

U.S. Secretary of State Antony Blinken met with several members of the team recently during a visit to Qatar.

"You're famous around the world and a source of inspiration," he told them. Their story about the importance of women taking part in scientific work "sends an important message around the world, well beyond Afghanistan," he added.

Roya Mahboob is the founder of the Digital Citizen Fund, the parent organization of the team. She said the young women were "excited and grateful for this opportunity."

Several other members of the robotics team have been moved to Mexico. They were not identified for security reasons. The Associated Press reported one team member saying the team was grateful to Mexico "for saving our lives." She said thanks to Mexico's actions, "our story will not end in a sad way" because of the Taliban.

talented –adj. having a special ability to do something well : having talent

upheaval – n. a major change or period of change that causes a lot of conflict, confusion, or anger

uninterrupted –adj. not stopped or block; permitted to continue

inspiration – n. a person, place, experience, or the like that makes someone want to do or create something

What do you think of Qatar's offer to help the robotics team? We want to hear from you. Write to us in the Comments Section.