About 20 women will enter the U.S. Army Ranger School for the first time on April 20. The school has one of the most difficult training programs for soldiers. But a new Army survey shows that many male soldiers are unhappy about it.

The training at Ranger School is "physically and mentally grueling." Less than half of the male soldiers who begin the training complete it. During the 62-day-long course, soldiers train in the jungle, mountains and swamps. The course is designed to simulate combat. They often eat just one meal a day and may not sleep for days. They lose an average of 15 to 20 pounds during the course. 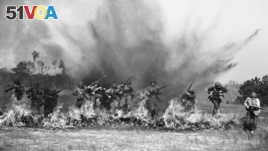 Ranger Troops of the U.S. Army demonstrate charging through a wall of fire as land mines explode behind them during maneuvers at Camp Rucker, Ala., March 5, 1943. (AP Photo)

The women who will enter the Ranger School at Fort Benning, Georgia have already completed a 16-day-long course called Ranger Training Assessment Course, or RTAC. The course includes some of the same physical challenges as the Ranger School. It also includes testing of a soldier's ability to lead others. The Army says more than half of those who complete RTAC finish Ranger training.

FILE - In this Sept. 18, 2012 file photo, female soldiers from 1st Brigade Combat Team, 101st Airborne Division train on a firing range while testing new body armor in Fort Campbell, Ky., in preparation for their deployment to Afghanistan. Women may be able to begin training as Army Rangers in 2015 under a plan by the Defense Department. (AP Photo/Mark Humphrey, File)

Letting women enter Ranger training is part of the U.S. military's larger effort to open many jobs to women that they have historically not been allowed to perform. Women are not permitted to hold some of the most dangerous jobs, including infantry and Special Forces, like Rangers, SEALs and Green Berets.

In 2012, then-Defense Secretary Leon Panetta ordered American military services to open all of their jobs to women unless they can show why women cannot perform them. If the military wants to ban women from some jobs, they must ask for permission from the Secretary of Defense, who will make the final decision.

On April 6, the Associated Press reported that male soldiers serving in the special operations forces do not believe women can be Rangers. They fear that standards will be lowered so that women can meet them. They believe political leaders are forcing the military to do what it does not want to do.

The news report came from a survey that has not yet been released by the Army, but the news agency was able to read it. The AP reported that about 9,000 soldiers answered questions in the survey.

Even if some women complete the Ranger course, they will not be able to join one of the Army's four Ranger units because they are open only to men. Some believe only soldiers who are members of a Ranger unit are true Rangers. But the Army tells VOA that any women who graduate from the course on June 18th will be considered Rangers, the first in the history of the U.S. Army.

Christopher Jones-Cruise wrote this story from Washington. Hai Do was the editor.

swamp – n. land that is always wet and often partly covered with water

simulate – v. to look, feel or behave like (something)

Do women serve in combat units in your country's military? Do you believe women should be able to hold the same military jobs as men? We want to hear from you. Write your thoughts in the comments section.