Update Required To play the media you will need to either update your browser to a recent version or update your Flash plugin.
By Caty Weaver
18 March 2022


Clarissa Ward stopped her live television report on Ukrainian refugees to help a frightened older man, then a woman, down a steep path. She urged them along in Ukrainian.

A day later, Lynsey Addario, a photographer for The New York Times, captured a shocking image just after a Russian shell exploded in Irpin, Ukraine: A mother and her two children dead in the road, killed as they were trying to flee the city for safety. A friend who was helping them, lies near, dying as Ukrainian forces try to save him.

The memorable reports show both the skill and bravery of female reporters serving as eyewitnesses to Russia's invasion of Ukraine. Men dominate journalism, in general, and war reporting, especially. But the number of women war correspondents has risen substantially in the last fifty or so years. And, their growing presence has expanded content coverage in war zones. 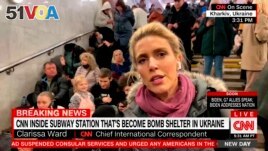 This image taken from video provided by CNN shows Chief International Correspondent Clarissa Ward reporting from inside a subway station in Kharkiv, Ukraine. (CNN via AP)

Women report on the tactics of war, like more traditional reporting, but give equal measure to its human costs. The stories reporters provide of events on the ground today are, arguably, more inclusive than in the past.

Ward's reported captured the struggle of those trying to flee.

"People are so exhausted, they can barely walk," Ward said during her report. "And they're the lucky ones."

Seeking a ‘more human side' to war coverage

Any and all war reporters working in a conflict area can face serious danger, including death. Women journalists started braving the threats professionally most notably in the middle of the 20th century.

Writer Elizabeth Becker explores the influence of early women war reporters in her 2021 book, You Don't Belong Here. It tells about American Frances FitzGerald, Kate Webb of Australia and Catherine Leroy of France who Becker says were central to modern war reporting. They looked at the more human side of violent conflicts, Becker said.

The women were very driven as well. They travelled to Southeast Asia on their own money, without a staff job and little or no reporting experience. They broke the traditional male control on war reporting.

Traditionally, "the coverage was the battlefield, which is important," said award-winning journalist Becker, a 1970s war reporter. She said it took newcomer FitzGerald to ask, "'OK, what does this mean in terms of the Vietnamese and the villages?'"

FitzGerald earned a 1973 Pulitzer Prize and other honors for her book Fire in the Lake: The Vietnamese and the Americans in Vietnam.

In major 20th-century conflicts before Vietnam, including World War II and the Korean War, women faced military barriers and professional discrimination. Reporter-novelist Martha Gellhorn famously traveled secretly on a hospital ship to cover the World War Two D-Day landing in France after she and other women were denied frontline access.

Newspaper reporter Marguerite Higgins, who had also covered World War Two, was ordered out of Korea by an American officer when war broke out there in 1950. She appealed the decision to U.S. General Douglas MacArthur and won. Higgins earned a Pulitzer Prize in 1951 for her reporting, with the jury noting she was "entitled to special consideration by reason of being a woman, since she had to work under unusual dangers."

Edith M. Lederer was the first woman assigned full-time to the Vietnam War staff of The Associated Press. She remembers arriving in 1972 and meeting those who came before her, including Denby Fawcett. Fawcett began covering the war in 1966 for the Honolulu Advertiser newspaper.

Fawcett and "several other women succeeded in breaking the barrier and getting women onto the battlefield on an equal basis with men. That was a huge breakthrough," said Lederer, who is AP's chief United Nations correspondent.

Did women have any effect on the war reporting itself?

"I wrote some stories in Vietnam that I don't necessarily think that my male colleagues would have done," Lederer said.

"They were more interested in the way the war was playing out, which of course was the main reason they were, and I was there."

But she also took time to cover a hospital where children, including victims of bombings and shootings, were being treated. When she arrived with balloons for the patients, "youngsters of all ages shouting with delight almost bowled me over," Lederer said, reading from War Torn, the 2004 book in which she and other women who covered Vietnam tell about their experiences.

War reporting is "a sense of mission, it's a sense of purpose, it's a sense of being able to tell a story," said Christiane Amanpour, the London-born chief international anchor for CNN. "And women," she added, "are really very good at it, it seems."

It makes sense to Holly Williams, the Istanbul-based correspondent for CBS News reporting currently from Ukraine.

"I'm acutely aware of the fact that if you don't tell women's stories, you're missing at least half of the picture," Williams said. The Australian-born reporter has covered conflicts in Asia, Europe and the Middle East. Earlier, she worked for BBC News.

Clarissa Ward worked for CBS News before joining CNN and, before that, was based in Moscow and Beijing for ABC News.

"Often women do have a different perspective on war, and for a long time that was not really at the forefront of a lot of coverage," Ward said. She says she seeks out "the humanity behind the story, the experience of ordinary people who are living in war zones."

Yonat Friling is a Jerusalem-based senior producer with Fox News Channel. She was deeply moved by her recent experience covering the war in Ukraine. Covering the flood of refugees leaving Kiev made her think, she said, of her own family's flight from war in Europe in the 1940s.

She said "I saw children and women, and my grandparents in their faces. ... I know how much this is going to influence their whole life and the next generations."

The Associated Press reported this story. Caty Weaver adapted it for VOA Learning English. Susan Shand was the editor.

steep – adj. having a very sharp slope : almost straight up and down

dominate – v. to occupy a higher or stronger position

tactic – n. a method of employing forces in combat

bowl over – phrasal verb to greatly surprise or shock

mission – n. an operation or effort of great value

anchor – n. a broadcaster (as on a news program) who introduces reports by other broadcasters and usually reads the news

perspective – n. a way of looking at or considering something; a particular viewing position