Women's March on Washington Draws its Own Protests

Update Required To play the media you will need to either update your browser to a recent version or update your Flash plugin.
By Dr. Jill Robbins
19 January, 2017

On January 20, hundreds of thousands of Americans will gather on the National Mall in Washington, D.C., to watch Donald Trump be sworn in as the 45th president.

The next day, hundreds of thousands of protesters are also expected to gather on the National Mall. The biggest protest group will be the Women's March on Washington. About 200,000 people are expected to participate.

The idea for the women's march began on Facebook. Several women around the country who were upset about the presidential election results started Facebook pages, and called for action. 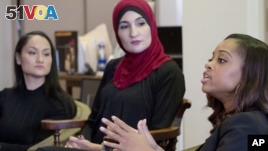 Tamika Mallory, right, co-chair of the Women's March on Washington, talks during an interview with fellow co-chairs Carmen Perez, left, and Linda Sarsour, Jan. 9, 2017 in New York. The march will be held Jan. 21, 2017, the day after Donald Trump's inauguration. (AP Photo/Mark Lennihan)

One of those women was Teresa Shook. She is a retired lawyer who lives in Hawaii. Upset by the results of the election, she decided to create a Facebook page for people who also were not happy with the results. When she woke up the next day, more than 10,000 people had joined the page. Many voiced concerns, among other things, about comments President-elect Trump had made about women.

Bob Bland is a fashion designer in Brooklyn, New York. She was also upset by the results of the presidential election. She, too, created a similar page on Facebook. And, she joined together with Shook's efforts.

Together, they and other women called for a march in Washington, D.C. The march would take place on January 21, Trump's first full day as president.

The movement became known as the "Women's March on Washington." The event's website says the march's aim is to "send a bold message to our new administration on their first day in office, and to the world that women's rights are human rights."

The movement has received criticism on social media. On Thursday, the hashtag #RenameMillionWomenMarch trended on Twitter in the United States. People suggested new names for the protest. Some suggestions mocked the protesters for not being able to accept the results of the election.

Others criticized the movement for not being inclusive. Women who oppose abortion, for example, have not felt welcome to join.

However, others noted that the trending hashtag and comments about the movement are good reasons why a women's march is needed.

The women's march is just one of several groups that plan to protest in Washington on Friday and Saturday. Protest groups had to apply for permits from the National Park Service if they planned to gather at sites it maintains. These sites include the National Mall and other famous places in Washington.

More than 30 groups applied for permits, the Associated Press reported earlier this month.

People will also be joining the women's march online. Sonya Huber organized an online Disability March. She asked that people who could not participate in person send in a photo and explain why they wished to protest.

Washington officials have received 1,800 requests for permits to park buses near the National Mall on Saturday, January 21. They received about 200 bus permits for Inauguration Day itself.

Now it's your turn. Are there similar protests going on in your country? What causes are women worried about where you live? We want to hear from you.

inclusive - adj. open to everyone or not limited to certain people

abortion - n. a medical procedure used to end a pregnancy and cause the death of the fetus