Pre-Teens Enter Universities in Canada, US

Update Required To play the media you will need to either update your browser to a recent version or update your Flash plugin.
By Jim Dresbach
09 September, 2016


Jeremy Shuler and Cendikiawan Suryaatmadja, also known as Diki, are starting a new year in school.

Both boys are 12 years old.

But unlike other children, Diki is studying physics at the University of Waterloo in Canada. He also is taking classes in mathematics, chemistry and economics. 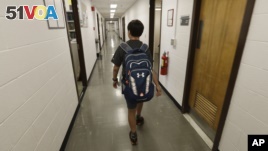 Jeremy Shuler, 12, a freshman at Cornell University, walks to meet an adviser on campus in Ithaca, New York, Aug. 26, 2016. He's the youngest student on record to attend the Ivy League school.

Jeremy is now taking classes at Cornell University in the American state of New York. He is the youngest student to ever enroll at Cornell. He is already skilled at calculus – high-level math that often deals with rates of change.

The two boys are among a growing number of children enrolling in universities.

Diki is from West Java, Indonesia. He moved to the Canadian province of Ontario for his schooling. He will live with his father near the university while he completes his studies.

The boy taught himself English in about six months by living in Singapore. While there, he read English language reports and watched English motion pictures with subtitles.

Jeremy Shuler is the son of two aerospace engineers from Texas.

"The classes are kind of easy, so far. I know they'll be harder pretty soon," he told the the Associated Press.

American Michael Kearney, born in 1984, remains the youngest ever person to have completed a study program at a college or university. He was eight years old when he graduated from college. He went on to teach college students while still a teenager.

This report was based on a story from VOANews. Jim Dresbach adapted it for Learning English. George Grow was the editor.

enroll – v. to enter someone as a member of something

subtitle – n. words that appear on a video screen during a movie, video or television show and that show what the actors are saying

aerospace – adj. of or related to travel in and above the Earth's atmosphere and the vehicles used in such travel