Wordle: The Game that Quickly Became an Internet Hit

Update Required To play the media you will need to either update your browser to a recent version or update your Flash plugin.
By Bryan Lynn
05 February 2022


You might have heard of the word game Wordle. Maybe you have even tried the game yourself. The online puzzle has become so popular that some people cannot go a day without it. Many players share their game results on social media.

On November 1, only 90 people had ever played Wordle. Within two months, that number had grown to 300,000. Social media users – especially famous people – helped grow the popularity of the game.

Wordle is a very simple game. That may be why its popularity spread so quickly and widely. Compared to many other computer games, the design is also very simple. It contains just 30 empty squares appearing under the name "WORDLE." 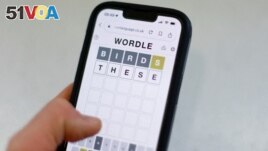 Wordle, the web-based word game is seen on a mobile phone in this picture taken February 1, 2022. (REUTERS/Andrew Boyers/Illustration)

Players get six chances to guess a five-letter word that has been chosen by the game for that day. The goal is to guess the word in the least number of tries.

The game is web-based, not an app. So, users do not need to download it. It is also free to play. Users can play the game once per day.

Wordle was created by Josh Wardle, a New York software engineer. He said he first made it for his partner, who likes playing word games like crossword puzzles. But he decided in October to release it publicly. The game immediately took off.

It became so successful that the New York Times recently announced it had bought the game from Wardle. The newspaper did not say exactly how much it paid for the game. But it did say the price was in "the low seven figures." The Times is already known for its wildly popular crossword puzzle and other games.

The decision immediately drew criticism from some fans on social media. Many said they feared the newspaper would not keep the game free for users. The Times currently requires users to pay for a subscription to read news content on its website. It also offers unlimited online game play for $1.25 a week.

In a statement, the newspaper said, "at the time it moves to The New York Times, Wordle will be free to play for new and existing players, and no charges will be made to its gameplay."

In a message on Twitter, Wardle said he was pleased with the deal. He suggested he was working with the Times to make sure the game would remain free. He added that the game had "gotten bigger than I ever imagined." And he noted that users had shared stories about how the game had helped unite distant family members and supported those recovering from sickness.

As Wordle has grown, so has the number of experts offering advice for the best ways to play the game. One language expert, David Sidhu, recently gave his opinion on the best words to start a game with. And the website Bustle offered a series of tips from TikTok and Twitter users on how to better play the game.

Sidhu lists the most common letters from English words. The top letters he provides are a, r, o, i, and s.

When considering these, and what positions the letters most commonly appear in, Sidhu came up with a suggestion for the best starting word for Wordle. That word is "soare," which means a young hawk. It is a British English word that was used commonly in the 1700s, the Collins English Dictionary reports. Another possibility is the word "samey," another British English word that describes something that is not unusual or interesting.

Some Twitter and TikTok users suggested starting words of either "clout" or "weird." Clout means having power and influence over other people or events. Weird means very strange or unusual.

Other popular suggestions on social media include using words with the most common vowels (a, e, i, o, or u) or the most commonly used English consonants (r, t, n, and s).

Bryan Lynn wrote this story for VOA Learning English, based on reports from The Associated Press, Reuters, Twitter and other online sources.

puzzle – n. a game or activity in which players have to put pieces together or answer questions using skill

figure – n. a symbol for a number

clue – n. a sign or piece of information that helps you solve a problem or answer a question

app – n. a computer program that carries out a specific job, especially on a mobile device

subscription – n. an agreement that you make with a company to get a publication or service regularly and that you usually pay for in advance

consonant – n. a speech sound (such as /p/, /d/, or /s/) that is made by partly or completely stopping the flow of air breathed out from the mouth