Words and Their Stories: All About Eyes

Update Required To play the media you will need to either update your browser to a recent version or update your Flash plugin.
By Jill Moss
24 May, 2014

Today's program is all about eyes. When it comes to relationships, people's eyes can be a window into their hearts. This means that their eyes can tell a lot about how they feel. We will tell a story about a man and woman who are teachers at the same school. The woman is interested in the man. She uses many methods to catch his eye, or get him to notice her. Once he sets eyes on her, or sees her, she might try to get him interested in her by acting playful. In other words, she might try to make eyes at him or give him the eye.

Let us suppose that this man gets hit between the eyes. In other words, the woman has a strong affect on him. He wants to spend time with her to get to know her better. He asks her out on a date.

She is so happy that she may walk around for days with stars in her eyes. She is extremely happy because this man is the apple of her eye, a very special person. She might tell him that he is the only person she wants, or "I only have eyes for you."

On their date, the couple might eat a meal together at a restaurant. If the man is really hungry, his eyes might be bigger than his stomach. He might order more food than he can eat. When his food arrives at the table, his eyes might pop out. He might be very surprised by the amount of food provided. He might not even believe his own eyes. If fact, all eyes would be watching him if he ate all the food. This might even cause raised eyebrows. People might look at the man with disapproval. 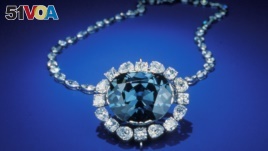 The beautiful Hope Diamond really "caught my eye"
During their dinner, the couple might discuss many things. They might discover that they see eye to eye, or agree on many issues. They share the same beliefs and opinions. For example, they might agree that every crime or injury should be punished. That is, they firmly believe in the idea of an eye for an eye. They might also agree that it is wrong to pull the wool over a person's eyes. This means to try to trick a person by making him believe something that is false. But the man and woman do not believe in the evil eye, that a person can harm you by looking at you.

The next day, at their school, the woman asks the man to keep an eye on, or watch the young students in her class while she is out of the classroom. This might be hard to do when the teacher is writing on a board at the front of the classroom. To do so, a teacher would need to have eyes in the back of his head. In other words, he would know what the children are doing even when he is not watching them.