Goodbye, Summer. Hello, Autumn. Or Is It Fall?

Update Required To play the media you will need to either update your browser to a recent version or update your Flash plugin.
By Anna Matteo
24 September, 2016


Now the VOA Learning English program, Words and Their Stories.

This is the program that explores the origin and uses of popular words and expressions in American English. Today, we are going to talk about "autumn."

In half of the world, summer has come to an end. Swimming pools have closed. Children are back in school. The days grow shorter, and the weather cooler. 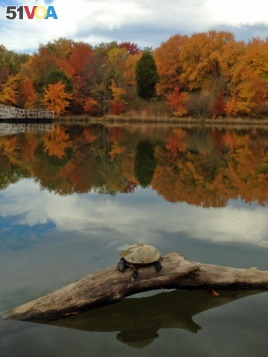 A little turtle enjoys the sun on a chilly autumn day at a park in Springfield, Virginia. (Diaa Bekheet/VOA)

In many parts of the United States, trees appear on fire as their leaves turn brilliant shades of gold, orange and red.

From the Pacific Northwest to New England to the Mid-Atlantic and Appalachian states -- the autumn leaf-changing scenery is breath-taking.

Autumn is also called "fall." This is probably because it is the time when trees lose their leaves and they fall to the ground.

During fall, children around the United States love to gather leaves into large piles and jump into them.

But why do we have two names for one season?

In the English language, calling the season "autumn" first began in the 12th century. But the word was not commonly used until about the 16th century. This is about the same time that people began using the word "fall" to mean autumn.

However, even earlier, the season was called "harvest."

In the early days of the United States, autumn was a time for preparing for the winter months by collecting and preserving food. People gathered corn, nuts and berries. They also dried and salted meats to feed them through the long, cold winter.

In modern times, refrigeration, grocery stores and pizza delivery help us survive through winter. But in autumn we still need to prepare.

If you have a fireplace or a wood stove in your home, you will collect, chop or buy firewood. You may also need to prepare your home by fixing or weather-proofing doors and windows.

If you have a car, you make sure the tires and fluids are also ready for the cold winter months. These preparations are called winterizing.

Actually, many people winterize their wardrobes, too. They put away their lightweight summer clothes and flip flops, and bring out their coats, sweaters and boots.

To prepare for the winter months, some animals gather food. The squirrel is well known for its skill in this activity.

Squirrels gather and store seeds and nuts in their nests. They search the ground for fallen nuts. They pick nuts from tree limbs, sometimes throwing them down to the ground below.

This hoarding helps them survive the winter. And it gives us a common expression.

To squirrel something away means to save it for future use. Things you squirrel away become your stash. We often use this expression when talking about money and food. But any resource you may need later can be squirreled away.

For example, a child might squirrel away chocolate, hiding their stash from brothers and sisters. This guarantees the child can satisfy their sweet tooth at any time.

Unlike squirrels, you can squirrel things away during any time of the year. Also, unlike squirrels -- who are furry flurries of activity during the autumn -- many people slow down during this time. The expression autumn years refers to the later years of a person's life, especially after a person has stopped working.

For example, "She worked hard her entire life. She saved her money and invested it wisely. So, she was able to enjoy her autumn years in comfort. She was finally able to travel around the world."

This time of life can also be called "twilight years." Regardless of your age, autumn can be a sad time for gardeners. People who spent the entire summer cultivating their gardens may feel sad to see the empty garden beds of autumn.

The poem "September Tomatoes" is for those people.

The whiskey stink of rot has settled
in the garden, and a burst of fruit flies rises
when I touch the dying tomato plants.
Still, the claws of tiny yellow blossoms
flail in the air as I pull the vines up by the roots
and toss them in the compost.
It feels cruel. Something in me isn't ready
to let go of summer so easily. To destroy
what I've carefully cultivated all these months.
Those pale flowers might still have time to fruit.
My great-grandmother sang with the girls of her village
as they pulled the flax. Songs so old
and so tied to the season that the very sound
seemed to turn the weather.

As summer ends, so does this episode of Words and Their Stories. And like summer, we will return, not in a year, but rather next week!

brilliant – adj. (of light or color) very bright and radiant.

scenery – n. view of natural features (such as mountains, hills or valleys) that is pleasing to look at

winterize – v. to make (something) able to resist the effects of winter weather

wardrobe – n. a collection of clothes that a person owns or wears

stash – n. an amount of something that is stored or hidden

flurry – n. a brief period of excitement or activity

whiskey – n. a strong alcoholic drink made from a grain (such as rye, corn, or barley)

claw – n. a body part of an animal (such as a lobster or crab) that is used for gripping and holding things : Note: in the poem, the plants are given "claws," an animal feature, to show they are hanging on.

blossom – n. a flower especially of a fruit tree

compost – n. a decayed mixture of plants (such as leaves and grass) that is used to improve the soil in a garden

cruel – adj. causing or helping to cause suffering

flax – n. a plant that has blue flowers and that is grown for its fiber and its seed