Update Required To play the media you will need to either update your browser to a recent version or update your Flash plugin.
By Shelley Gollust
20 October, 2012

Baseball is America's national sport. So it is not unusual that many popular expressions come from baseball. But first, let me explain a little about the game. 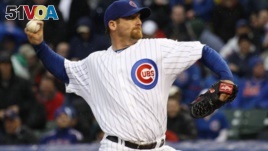 Chicago Cubs starting pitcher Ryan Dempster
Now, here are some common expressions from baseball. Someone who is on the ball is intelligent and able to do a good job. But a person who threw a curve ball did something unexpected. Someone who steps up to the plate is ready to do his or her job. A pinch hitter takes the place of someone else at a job or activity.

A person who strikes out or goes down swinging attempted something but failed. We also might tell the person that three strikes and you are out. But someone who hit a home run or hit it out of the park did something extremely well.

Sometimes I have to give information quickly, without time to think it over. Then I would say something right off the bat. If someone is doing an extremely good job and is very successful, you might say he or she is batting one thousand.

If I say I want to touch base with you, I will talk to you from time to time about something we plan to do. I might say I touched all the bases if I did what is necessary to complete a job or activity. And if I covered my bases I was well prepared. However, someone who is way off base did something wrong or maybe even dishonest or immoral. A person with strange ideas might be described as out in left field.

Let us say I want to sell my car but I do not know exactly how much it is worth. If someone asks me the price, I might give a ballpark figure or a ballpark estimate.

If someone offers me an amount that is close to my selling price, I might say the amount is in the ballpark. However, if I say we are not in the same ballpark, I mean we cannot agree because my ideas are too different from yours.

Finally, when a situation changes completely, we say that is a whole new ballgame.