Don't Put Yourself "Behind the Eight Ball"

Update Required To play the media you will need to either update your browser to a recent version or update your Flash plugin.
By Anna Matteo
13 May, 2017

On this program, we tell about expressions and how they are used in American English.

Preparing for this show is not always easy. Some expressions have complex roots. And Americans sometime use expressions in some situations, but not others.

Every week I write and produce a new show. My goal is to have everything ready by Thursday. So, if I don't have my report written by Wednesday, I really feel behind the eight ball.

In other words, I feel like I'm in a difficult situation. It will be hard to write the story, have an editor look at it and then produce it by Thursday night. I don't like to be behind the eight ball. Nobody does.

The expression "behind the eight ball" comes from the table game of pool. 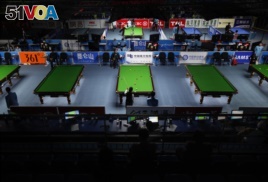 Competitors are seen playing in the billards event at the Asian Games in Guangzhou, China, 2010. (AP Photo/Wong Maye-E)

As you might know, pool is played with sixteen small, hard balls. Fifteen of the balls are either solid colored or have stripes and they all have numbers. The other ball, known as the cue ball, is white. Players strike the cue ball with the end of a long piece of wood, called a cue stick. The aim is to shoot the numbered balls into one of six open pockets around the edge of the pool table.

You can play many different games on a pool table. One of them is called Eight Ball.

In Eight Ball, players try to put the numbered balls into the pockets, with the eight ball the last to go in. If a player sinks the eight ball before all the other balls leave the table, he or she loses.

So, if you are behind the eight ball, you are in a bad position. There is almost no way out.

Another expression from the world of games is nearly the same as being behind the eight ball. It is a sticky wicket.

A sticky wicket is a difficult or sensitive situation. This term comes from the sport of cricket. In the case of this expression, the "wicket" is part of the cricket field between the stumps – the poles or sticks stuck in the ground.

The grass on the wicket is usually shorter than other grass or there might not be any grass at all. So, weather conditions may affect this area and how the ball moves. If the wicket is too wet or too dry, the ball can move in an unpredictable way. This makes it difficult for the batter.

These days, cricket teams may use a cover for the wicket, but that hasn't affected the use of this expression. A sticky wicket is still pretty common in American English.

However, if you don't want to use these expressions from the pool hall or cricket field, you can simply use the words dilemma or predicament. They also mean a difficult situation.

What is wrong? You look terrible.

I have a really big problem.

Why don't you tell me about it? Maybe I can help.

All right. I took a co-worker to a friend's party over the weekend.

Well, I saw him take something from my friend's house without asking.

You mean, he stole something.

Yes. And now, I have to say something to my co-worker.

That really is a sticky wicket. I would not want to be in your position.

Next, let's hear the expression "behind the eight ball."

Well, I'm behind on my bills this month. See, I really like this girl. So, I've spent a lot of money on wining and dining her.

And you didn't think of how much all those meals and drinks would cost? You have really put yourself behind the eight ball!

And me? Well, I am no longer behind the eight ball. We have finished Words and Their Stories for this week. But there is always next week to worry about!

Practice using "behind the eight ball" or "sticky wicket" in a sentence. Does your language have an expression that has the same meaning? You can do both in the Comments Section.

Marilyn Christiano wrote the explanation of the pool game Eight Ball. Anna Matteo wrote the rest of this story. George Grow was the editor. At the end of the piece, Tony Tuff sings his song "Sticky Wicket."

edit – v. to prepare (something, such as literary material) for publication or public presentation editor – n. one who edits

sensitive – adj. needing to be handled in a careful or secret way in order to protect someone or something

on hand – phrasal : available for use

wining and dining – idiomatic expression : If you wine and dine someone, you entertain them in an expensive way, usually for a reason. < They wined and dined us in order to get us to sign the new contract. >