Who's in Your Inner Circle?

Update Required To play the media you will need to either update your browser to a recent version or update your Flash plugin.
By Anna Matteo
06 May, 2017

On this program we explore the origins and usage of words and expressions that we use everyday in our conversations.

Sometimes, this show begins with a simple word. Then it builds and builds into a long story with many different expressions. Today, we start with the word "circle." Let's see where this circle leads us. 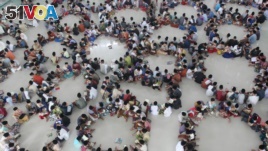 Students sit in circles during a Quran recital class on the first day of the holy fasting month of Ramadan at a school in Medan, North Sumatra, Indonesia, June 2016. (AP Photo/Binsar Bakkara)

A circle is simple and elegant. Mathematicians describe it as 360 degrees traveling endlessly around and around.

The expression circle of life comes from this idea. Living creatures are constantly being born and dying, over and over, like a circle.

Many of the circle expressions we will learn today mean just that – to go around and around while thinking, speaking or doing just about anything.

Now, to run around in circles or to run in circles is not a type of exercise. If you are running in circles you are wasting time doing an activity that has no purpose or end. For example, I was planning to clean and organize my apartment over the weekend. It seemed like a simple task. But for hours, I just kept running around in circles. So, I decided to stop and try again next weekend.

You can also define these circles in a more detailed way. For example, you can call your family members your family circle. This includes your immediate family -- your mom, dad, brothers and sisters -- and also your extended family -- your grandparents, aunts, uncles, nieces, nephews and cousins.

The people in your social circle are the friends with whom you socialize – you know, hang out and do fun things.

If you hang out with people for a special reason, they can be in a special circle. Let's say two mystery writers know each other from going to the same events for many years, you could say they run in the same literary circle.

Those in your inner circle are the most trusted people in your life. They mean more than your social circle. They may include your family members, friends and professional colleagues – those who you trust most.

Now, talking in circles does not mean you are talking with people in your circles. To talk in circles is to talk a lot but not make much sense. When you talk in circles you may be trying to avoiding a topic; so, you talk around it.

When we circle back, we revisit something we have already done or discussed. For example, let's say you bring up an issue at a work meeting but there isn't enough time to discuss it. Your boss may say that the group will circle back to your issue at another time.

And to come full circle is an expression that we use to describe something such as an idea, experience or career that has changed a lot -- only to find itself back to where it started. Imagine a dot that starts at one point on the outer part of a circle and travels all the way around, ending exactly where it started.

That's what circles do – they go around and around in 360 degrees.

Now, let's hear some of these circle expressions used in a short story.

Samantha loves to go hiking. She loves being outdoors, exploring nature and seeing new parts of the country. Her goal is to hike every major trail in the eastern part of the United States -- from Maine to New York to the Carolinas and the Florida Keys.

She may have a goal, but she doesn't take hiking that seriously. To her, it's just fun! So, she joins a hiking group in the city where she lives.

In her new hiking circle, there's one guy, Alex, who takes hiking very seriously. He even gets competitive, if such a thing is possible with hiking.

For Alex, a hiking trail is something to defeat and then brag about later. He likes to say he runs circles around all the other hikers in the group.

Samantha thinks this kind of talk is really silly and may represent a deeper personal problem. She wonders if she should even run in the same circle with Alex. But, she thinks, he does know some pretty great trails. So, she keeps him in her in hiking circle but out of her other social circles and nowhere near her inner circle.

On a beautiful day in May, Samantha's hiking circle meets to decide which trail to hike for their first summer trip.

Samantha speaks up first. She suggests a mountain trail in West Virginia. It is one she knows very well. In fact, everyone in her family circle knows it really well. As a child her family spent summer vacations in the area.

The others think it's a great idea – well, everyone except Alex.

For 15 minutes, he talks in circles. He gives reasons that do not make any sense about why they should not hike this trail. He adds that the trail is much too easy for him. This leads the others to wonder if the trail is worthwhile. So, they go around in circles for hours, talking about many trails but deciding on none.

Many pots of coffee later, the group circles back to Samantha's first suggestion. They decide to hike the trail in West Virginia after all. Samantha rolls her eyes but she is happy the selection process has come full circle.

When the time comes, the group hikes the trail and everyone has a wonderful time -- well, again, everyone except Alex. He hiked the trail far ahead of everyone else, took a wrong turn and got lost. After a two-hour search-and-rescue effort, the park police found him shivering under a lot of leaves and sticks in the dark, cold night.

Alex recovered. He's fine. But he's no longer a part of Samantha's hiking circle ... or anyone's hiking circle. The last the group heard, he quit hiking and joined a competitive yoga group.

That is one circle, Samantha thought, that I want nothing to do with. And that is some of our expressions using this simple shape that goes around in 360 degrees – the circle. We began our show with a simple definition of a circle.

And now, we have come full circle. Join us again next week when we will circle back with new expressions to teach.

Anna Matteo wrote this story for VOA Learning English. Ashley Thompson was the editor. Natalie Merchant is singing her song "Circle" at the end.

immediate – adj. being next in line or relation the immediate family

extended family – n. a family that includes in one household near relatives (such as grandparents, aunts, or uncles)

rolls one's eyes – idiom : To turn one's eyes upward or around in a circle, usually as an expression of exasperation, annoyance, impatience, or disdain.

shiver – v. to shake slightly (as from cold or fear)

yoga – n. a system of exercises for mental and physical health