Update Required To play the media you will need to either update your browser to a recent version or update your Flash plugin.
By Jill Moss
23 NOV, 2013

Computer technology has become a major part of people's lives. This technology has its own special words. One example is the word mouse. A computer mouse is not a small animal that lives in buildings and open fields. It is a small device that you move around on a flat surface in front of a computer. The mouse moves the pointer, or cursor, on the computer screen.

Computer expert Douglas Engelbart developed the idea for the mouse in the early nineteen-sixties. The first computer mouse was a carved block of wood with two metal wheels. It was called a mouse because it had a tail at one end. The tail was the wire that connected it to the computer. 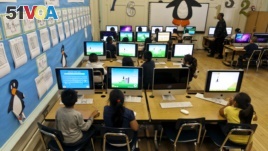 Read, listen and learn English with this story. Double-click on any word to find the definition in the Merriam-Webster Learner's Dictionary.
Using a computer takes some training. People who are experts are sometimes called hackers. A hacker is usually a person who writes software programs in a special computer language. But the word hacker is also used to describe a person who tries to steal information from computer systems.

Another well known computer word is Google, spelled g-o-o-g-l-e. It is the name of a popular "search engine" for the Internet. People use the search engine to find information about almost any subject on the Internet. The people who started the company named it Google because in mathematics, googol, spelled g-o-o-g-o-l, is an extremely large number. It is the number one followed by one-hundred zeros.

When you "Google" a subject, you can get a large amount of information about it. Some people like to Google their friends or themselves to see how many times their name appears on the Internet.

If you Google someone, you might find that person's name on a blog. A blog is the shortened name for a Web log. A blog is a personal Web page. It may contain stories, comments, pictures and links to other Web sites. Some people add information to their blogs every day. People who have blogs are called bloggers.

Blogs are not the same as spam. Spam is unwanted sales messages sent to your electronic mailbox. The name is based on a funny joke many years ago on a British television show, "Monty Python's Flying Circus." Some friends are at an eating place that only serves a processed meat product from the United States called SPAM. Every time the friends try to speak, another group of people starts singing the word SPAM very loudly. This interferes with the friends' discussion – just as unwanted sales messages interfere with communication over the Internet.