Update Required To play the media you will need to either update your browser to a recent version or update your Flash plugin.
By Harold Berman and Anna Matteo
22 April, 2017

The cross is an ancient symbol in many cultures and religions. It is closely linked, of course, with the Christian church. The cross was also a sacred symbol to the Egyptians and to the Aztecs in Mexico. Scandinavian cultures also used crosses to mark the edges of their territory.

Today, we use the word "cross" in many expressions that seem to have little direct connection to religious beliefs. 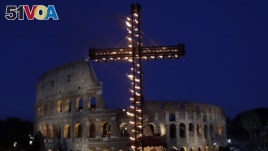 A view of the ancient Colosseum in Rome, April 14, 2017. Pope Francis presided over the Via Crucis (Way of the Cross) torchlight procession on Good Friday in front of Rome's Colosseum. (AP Photo/Alessandra Tarantino)

For example, one way of wishing good luck to a friend is to tell them that you will keep your fingers crossed for whatever they are trying to do.

Sometime we don't say anything. We often just cross two of our fingers to wish them luck. But, more often, just saying the expression is believed to be enough to help bring success.

Crossing the fingers when making a wish may be a tradition many hundreds of years old. It probably has its roots in the ancient Christian belief that making the sign of the cross would keep away evil spirits and bad luck.

Years ago, children would cross their fingers when they were telling a small lie. It is an old belief that if you cross your fingers while you tell a lie, you won't get caught lying and, therefore, won't be punished.

However, over the years, children most likely have unhappily discovered that crossing their fingers offers no such protection. Perhaps that explains why most children these days do not cross their fingers for luck.

Now, some children may use another old expression -- cross my heart. Children might say this when they want to prove that they are really and truly telling the truth about something.

A child may make an "X" over their heart with their finger while saying it. Language expert Charles Earle Funk says "cross my heart," and crossing the heart with the finger, probably come from the Roman Catholic Church tradition of making the sign of the cross.

Funk also says that many years ago, children in the United States often said this: "Cross my heart and hope to die and hope the cat will spit in your eye."

They don't say this anymore. No one does. In fact, this is the first time that I have heard of this expression.

But I have heard it said this way: "Cross my heart and hope to die and stick a needle in my eye." This means that, in order to convince others that they are telling the truth, a child is willing to die and have a needle painfully stuck into the eye.

Now, besides children protesting their innocence -- we use the word "cross" in many other ways.

To double cross does not mean to cross yourself twice. This means to betray someone, especially someone who trusts you. "Double-crosser" is not a name you want. Nobody trusts a double-crosser.

To have your wires crossed is different. This simply means two people fail to understand each other. There is no purposeful or planned attempt to betray one another.

Merriam Webster's dictionary says that this expression is used between two people. This is because the origin of this expression comes from the early days of using the telephone. When two wires came in contact with each other, phone conversations could be mixed up.

However, we also use this common expression to mean someone simply made a mistake -- all on their own. For example, "I must have gotten my wires crossed. I thought the party was on Saturday, not Sunday."

Now, there is no case of mistaken information if you are at cross purposes with someone. This expression began in the 1660s. It means that different goals are working against each other.

To understand how to better use these [and other] expressions, let's hear them used in a short story.

Let's say you work at a large book publishing company as an editor. Your job as an editor is to make sure the texts in the books are accurate and that the writer is happy with the end product. You and the writer want to sell many books.

The goal of the company is the same – publish good books and sell as many as possible.

But recently, conditions in the book publishing world have not been great – far from it. Book sales have been down. Each department has been feeling the pressure and each has its own idea of how to help.

The public relations (PR) department wants to spend more money on author tours and book release parties. But the business office sees these activities as unnecessary expenses. So, their goal is to cut them. These two departments are definitely working at cross purposes.

You probably feel that every time you cross paths with them. Someone in the business department is always trying to convince you of their side. The same is true with the PR department. You want to stay out of it. So, you try to not cross their paths.

One day, as you are trying to avoid crossing paths with your co-workers, something crosses your mind. Suddenly and without forethought, you think of a way to make both departments happy.

You tell your friend in PR your idea and he loves it. Then you tell another friend in the business office your idea. She loves it, too. However, they both get their wires crossed. They didn't completely understand all the details of your idea.

So, when they come together in a meeting to discuss the idea, they realize it is not exactly what they had thought. They are not happy. They become cross with each other -- and with you! They both think you tried to double cross them!

For several weeks, both departments are angry with each other and with you. It causes you much worry and concern. This is a heavy cross to bear. You lose sleep and work becomes unbearable.

But you still think you can clear it up with a simple explanation.

And that is what you do.

One day, you invite both of your friends to lunch. You explain that they didn't understand your idea fully. You even cross your heart and hope to die if you are lying. Your explanation -- and this silly childhood expression -- is enough to prove to them that you are telling the truth. They apologize and realize that your idea can still work.

You say to them, "That's up to you two! I'll keep my fingers crossed for the both of you. But now, I am going back to what I do best for the company -- editing stories."

And that's the end of this Words and Their Stories. But we'll be back next week with another new story explaining common expressions in American English.

I cross my heart.

Harold Berman wrote the first part of the story dealing with crosses in history. Anna Matteo wrote the rest. Ashley Thompson was the editor. Crosby, Stills, & Nash sing "Southern Cross" at the end of the program.