Deadline: A Common Word from the Civil War

Update Required To play the media you will need to either update your browser to a recent version or update your Flash plugin.
By Anna Matteo
27 May, 2017


On the last Monday in May, people in the United States celebrate Memorial Day. This federal holiday honors members of the American military who died in war.

Schools and government offices close. Most people in the U.S. have this day off from work. People celebrate Memorial Day with parades, outdoor musical events as well as picnics and parties.

Most Americans consider it the start of summer, although the season really begins in June. With so many people off work, Memorial Day has also become a popular shopping day.

However, for many people Memorial Day is a serious, even sad, holiday. Those who have lost family members to war visit burial sites to decorate their graves. They place flowers, wreaths and U.S. flags on grave markers.

Memorial Day comes from a tradition that began after the U.S. Civil War called Decoration Day.

The Civil War was a very dark time in U.S. history. Historians have long thought that about 620,000 soldiers died in the fighting. However, new research suggests that the dead numbered closer to 750,000.

In 1868, about 5,000 people gathered at Arlington National Cemetery on the edge of Washington, D.C. They decorated the more than 10,000 graves of Union and Confederate soldiers. They called it Decoration Day.

The tradition spread to other areas of the country. In 1873, New York State called it Memorial Day and was the first to make it a legal holiday. Other states followed. But not all. Some southern states had (and still have) separate celebrations that honor only dead Confederate soldiers.

After World War I ended in 1918, Memorial Day became a day to honor all American soldiers killed in war. In 1971, Congress passed a law making it an official federal holiday. 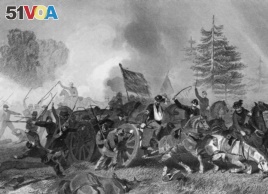 Along with Memorial Day, the Civil War is also the origin of a common and very useful word: deadline.

Now, I have used this word probably thousands and thousands of times. But I honestly never thought about why "dead" and "line" came together to mean a time limit. It might sound very strange to an English learner -- dead + line = time limit.

Deadline comes from Civil War prisons. A "do-not-cross" line circled these prison. Guards were told to shoot and kill any prisoner who might "touch, fall upon, pass over, under or across the said 'dead line.' "

The Online Etymology Dictionary says, this quote comes from the trial of a man name Henry Wirz, a commander of a Confederate prison called Fort Sumter.

Wirz, a Swiss-born Confederate soldier, was tried and executed on October 31, 1865. He was found guilty of treating Union prisoners inhumanely and for killing some unlawfully. But his trial was very controversial.

According to a Report of the Secretary of War, dated October 31, 1865, Wirz established a ‘dead line' around the prison. He instructed prison guards "to fire upon and kill any of the prisoners" who might touch, fall upon or pass over the dead line.

By 1920, the word "deadline" worked its way into the American news media industry. It means the time by which a writer must complete a story for publication.

Now, we use the word "deadline" everywhere. People shopping for a home might have a deadline for offering a bid on a house. Students have deadlines on their homework and reports. There are deadlines for paying taxes, applying for college and accepting membership to a club. Many things have deadlines.

When you are under a deadline you can feel pressure. This is especially true if it's a tight deadline. A tight deadline means there is not much time to get something done.

Some people do not like tight deadlines. Those people might say they do not work well under deadlines.

If you say you have a deadline hanging over your head, you are worrying about meeting your responsibility on time. Nobody likes anything hanging over their head!

Some people work very well under deadlines. They meet their deadlines with no problem. If you are this kind of person, you can call yourself deadline driven. This means that you like deadlines and are successful at meeting them. Employers like to see this on a resume.

Hey, do you want to grab some lunch with me?

I would love to. But I can't. I'm on deadline for a big story. So, I'll eat something quick at my desk.

When is your deadline?

My editor needs my story by 2 pm.

That's a pretty tight deadline. Do you think you'll finish?

I have to! I've never missed a deadline in my five years working here.

Wow, you're really deadline-driven. I hate to say it, but I've missed a couple of my deadlines this month.

I just don't like a deadline hanging over my head. I just want to get it done or it's all I think about.

Well, I won't keep you from your deadline! Call me when you're done. I'll buy you a cup of coffee.

My deadline for Words and Their Stories is every Thursday. When I meet my deadline, I can relax and enjoy my Friday.

And I like meeting my deadlines so they aren't hanging over my head. I'm Jonathan Evans ...

How do you say "deadline" in your language? And are you deadline driven or do you miss your deadlines? Let us know in the Comments Section!

parade - n. a public celebration of a special day or event that usually includes many people and groups moving down a street by marching or riding in cars or on special vehicles (called floats)

picnic - n. a meal that is eaten outdoors especially during a trip away from home

decorate - v. to make (something) more attractive usually by putting something on it

decoration - n. something that is added to something else to make it more attractive

wreath - n. an arrangement of leaves or flowers in the shape of a circle that is worn or placed as a sign of honor or victory

controversial - adj. relating to or causing much discussion, disagreement, or argument : likely to produce controversy

bid - n. to offer to pay (a particular amount of money) for something that is being sold