Seeing an Eclipse Is Good! Being Eclipsed Is Not

Update Required To play the media you will need to either update your browser to a recent version or update your Flash plugin.
By Anna Matteo
19 August, 2017


Hello and welcome to Words and Their Stories from VOA Learning English.

On this program we explore the origin and usage of common expressions in American English. We always give examples or dialogues using the expressions. Sometimes we even use the words in a short story. All of these can, hopefully, teach you how to best use the expressions.

For today's word we turn our eyes toward the sky!

There is one natural event that many people want to experience during their lifetime -- an eclipse!

Whether solar or lunar, partial or total, these astronomical events bring the movement of our solar system a little more to life. 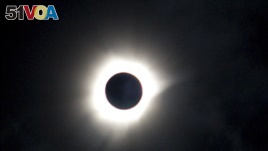 Solar, as we know, means "relating to the sun." So a solar eclipse happens when the moon passes between the sun and Earth. A dark circle either completely or partly covers the sun as a result.

Lunar means "related to the moon." So, a lunar eclipse is when the moon looks as if it is completely or partially covered with a dark circle.

Some ancient cultures considered an eclipse a sign that the world was ending. Other cultures viewed it as a battle between different animals in the sky as they try to eat up the moon or sun. Another cultural belief was that an eclipse was a time for deep thought and thinking about the past.

The word eclipse comes from a Greek word meaning "to leave," "to abandon," "to forsake a usual place" or fail to appear." Ancient Greeks thought of an eclipse as a time when the sun abandoned the earth.

In simple terms, an eclipse happens when a planet or satellite blocks the light of the sun. So, it is not surprising that we also use "eclipse" in the same way when talking about other things besides the sun, the moon and the earth.

In conversation, when one thing eclipses another it makes it less important or popular. For example, television eclipsed radio in the 1950s as the most popular form of home entertainment. When one person eclipses another, they do something better. For example, a younger child might hate it when her older sister's school and sports success eclipses her own. The older sister outshines the younger one.

This usage of eclipse is not only used when talking about people. Things can also eclipse other things, as in this sentence: The popularity of the company's new product quickly eclipsed all its earlier products.

Many synonyms of eclipse deal with light and casting shadows, like in the example of the older sister outshining the younger. If a person or a thing outshines another, the light they give off is so bright that no one notices anything else. You could also say the older daughter cast a shadow on her younger sister. Or you could say the younger sister was living in the shadow of her older sister.

Now, let's hear how we use eclipse this way in everyday conversation. Let's listen as two people talk as they wait in line to audition for a Broadway musical.

Are you ready for your singing audition today?

As ready as I'll ever be. The song I'm singing is my favorite and I know it really well.

I'm sure you'll do great. By the way, I'm Corrine. Corrine Mayfield.

Stravinski? Wait. Are you any relation to Doug Stravinski?!

Get out! His performance in Les Miserables was so beautiful. Critics are still talking about it! Wow! Doug Stravinski. What is he working on these days?

An album. His fourth album.

That is just awesome! It will probably be another number one seller! So, what's it like being his brother?

It must be tough living in the shadow of Doug Stravinski!

I don't think about it ... you know, until someone brings it up.

Oh, I'm so sorry. But it's just that ... well, he's so amazing and famous. He casts a really big shadow!

Yes. Look, do you mind if we don't talk? I really need to prepare for my audition.

Of course. Of course. It's so typical, isn't it -- an older brother or sister eclipsing a younger one. They do everything first, do it longer. And, they're usually better -- usually the shining star in the family!

Listen to me! I'm doing it again, aren't I? I am sure at this audition you are going to outshine everything your brother Doug has done on stage.

And that's the end of this Words and Their Stories!

Do you use the word "eclipse" like this in your language? Let us know in the Comments Section.

Anna Matteo wrote this story for VOA Learning English. Caty Weaver was the editor. The song at the end is Bonnie Tyler singing "Total Eclipse of the Heart."

astronomical – adj. of or relating to astronomy

abandon – v. to leave and never return to (something)

forsake – v. to give up or leave (someone or something) entirely

synonym – n. a word that has the same meaning as another word in the same language

casting – v. to send (something) out or forward : The fire casts [=gives off] a warm glow. The tree cast a long shadow on the lawn.

audition – n. a short performance to show the talents of someone (such as an actor or a musician) who is being considered for a role in a play, a position in an orchestra, etc. — often + for

get out - informal exclamation : used to express disbelief.

tough – adj. difficult to accomplish, resolve, endure, or deal with

typical – adj. normal for a person, thing, or group : average or usual