Expressions for the Road!

Update Required To play the media you will need to either update your browser to a recent version or update your Flash plugin.
By Anna Matteo
09 December, 2017

The United States is a big country with many, many roads. Many, if not most, of Americans depend on motor vehicles to get from place to place.

It goes without saying that, when talking or writing, Americans often use expressions with words from the world of automobiles. Now, let's examine a few common expressions that come from parts of a vehicle. 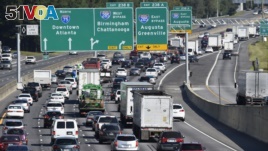 First is the part of the car that protects the front and back of a vehicle -- the bumper. The bumper is what suffers the most damage in a small accident.

The front bumper extends on both sides to the fender, which protects the front wheels. If your car hits someone else's and causes a small amount of damage, we call it a fender-bender.

But let's get back to the word bumper.

American traffic reporters often use the term bumper-to-bumper when describing heavy traffic. It means that vehicles are moving very slowly, and almost touching each other.

Americans can use the term bumper-to-bumper as an adjective. If you are late for dinner because of traffic, you can tell your friends, "Sorry, I'm late. But traffic was bumper-to-bumper." They will understand.

Another part of a vehicle – mainly found on small trucks and on some models of cars -- is the tailgate. This is the gate or doorway that opens up in the back of the vehicle. If your car or truck has one, you can lower the tailgate and sit on it.

This door on the back of larger passenger vehicles has led to something very American: the tailgate party. Tailgate parties usually take place in a parking area, where one or more of these vehicles are stopped. Their tailgates are open, with food or drinks available for the drivers and their passengers.

In the United States, tailgate parties are common at large sporting events or music shows.

Now, many cars do not have tailgates. That's fine. If you spend time friends and others in a large parking lot before a rock concert or a big game, you are still tailgating!

So, that form of tailgating is fun. But it is not fun when someone is tailgating your vehicle. A tailgater is someone who drives much too close to the back of your car. At best, this can be a pain, if not making you, the driver, really angry. But tailgating is also dangerous and the cause of many rear-end accidents.

There are other behaviors that can lead to a traffic accident.

Let's take rubber necking, for example. Rubber necking is when drivers slow down on a road to look closely at a wreck or something else eye-catching as they are passing.

Some drivers can stretch their neck far out of the window to see something like a serious crash. This is where we get the term. Drivers who rubber neck, however, can create their own accidents. First, they slow down, causing problems for other drivers and affecting the flow of traffic. But more importantly, they aren't looking at the road in front of them!

The first rule of driving should always be look where you are going! Another rule should be, stay calm.

The most dangerous kind of driving behavior is road rage. This is anger or violence towards other drivers. Road rage is such a big problem in some areas, that local governments have laws that make some acts of road rage illegal.

The road hog is more of a pain than dangerous. To hog something means to take too much of something. So, a road hog takes up too much of the road. The road hog sometimes drives in two lanes of traffic. Other times, they may not let other motorists pass them.

And that bring us to the end of our road and this episode of Words and Their Stories! Next time you take a drive, you'll be able to talk about your fellow drivers.

And with any hope, you won't run into any rage road. I'm Bryan Lynn.

Have you ever run into any of these of drivers on the road? Let us know in the Comments Section.

Anna Matteo wrote this story for VOA Learning English. George Grow was the editor. At the end of the show, Willie Nelson sings "On the Road Again."

neck – n. the part of an animal that connects the head with the body

parking – n. a large area of public land kept in its natural state to protect plants and animals