Are You Ready to Face the Music?

Update Required To play the media you will need to either update your browser to a recent version or update your Flash plugin.
By Anna Matteo
21 May, 2016

There are so many expressions in American English that sound pleasant but are not.

"Face the music" is a good example. When someone says they have to "face the music," it does not mean they are going to a musical performance or concert.

"Facing the music" means to accept the unpleasant results of an action.

Americans often use the word "face" in this way. For example, "I can't face another night of camping! It's cold and rainy." Or "In life, it is important to face your fears."

Face used in this way is very common. But now, back to facing the music.

Imagine a friend asks you to take care of her beautiful red sports car. 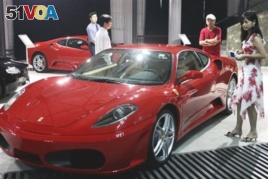 If you drive a friend's red sports car, like this Ferrari, please be careful. (AP Photo)

She gives you the keys and says, "Thanks so much for watching my car while I'm away. But please, do not drive it. It is an extremely fast car and you are not on the insurance."

But you do not listen. You want to show off to some friends and pretend the car is yours. So, you drive it around town one night. As bad luck would have it, you lose control of the car and drive it into a stop sign.

The damage is severe. When your friend returns you must tell her what you have done and "face the music."

The "music" here is the consequence or result of your actions. It could be losing her friendship or paying for repairs to her sports car or both. Whatever the music is, you must face it.

Most Americans know the expression "face the music." It is more than 150 years old. As with many expressions, its history is not clear.

In 1851, the writer James Fenimore Cooper reportedly explained "face the music" as a theatrical term.

In a theater, the orchestra often sits in front of the stage. So, actors come on stage facing the musicians. Many actors are very nervous, a condition called stage fright. They may want to run away. Face the music came to mean accepting stage fright and not surrendering to it.

Word experts also say "face the music" may have come from the military. 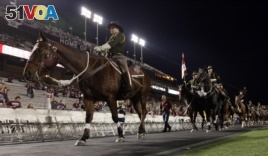 A solider who did something terrible could be forced out of the horse cavalry.

The army drummers would play a slow, sad beat. The soldier would be carried away seated backward on a horse and facing the music of the drums. Humiliating!

There are other American expressions that mean the same thing as face the music.

To "take your medicine" means to accept the results from something bad you have done. And if someone says, "You made your bed. Now lie in it," they mean you created a bad situation and now you will experience the results, or as we say in spoken American English, you must deal with it!

"Pay the piper" also means the same as "face the music." But, that expression has its own very interesting beginning. We will talk about that on another Words and Their Stories.

Anna Matteo wrote this piece for VOA Learning English with the help of former staff writers. Caty Weaver was the editor.

show off – v. to display proudly

pretend – v. to give a false appearance of being, possessing, or performing

cavalry – n. the part of an army that in the past had soldiers who rode horses and that now has soldiers who ride in vehicles or helicopters

confess – v. to admit that you did something wrong or illegal